Pollock Journal | Issue 3: Where the Wild Things are 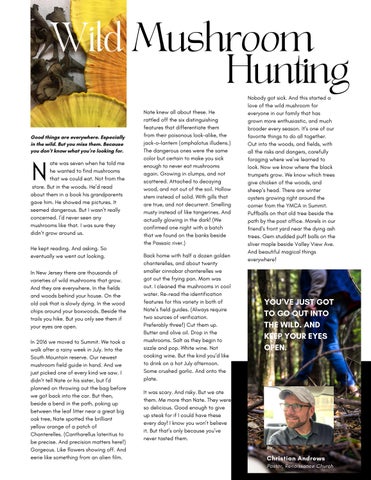 Wild Mushroom Hunting Nobody got sick. And this started a love of the wild mushroom for

Good things are everywhere. Especially in the wild. But you miss them. Because you don’t know what you’re looking for. ate was seven when he told me

he wanted to find mushrooms that we could eat. Not from the

store. But in the woods. He’d read about them in a book his grandparents gave him. He showed me pictures. It seemed dangerous. But I wasn’t really concerned. I’d never seen any mushrooms like that. I was sure they didn’t grow around us.

Nate knew all about these. He

everyone in our family that has

rattled off the six distinguishing

grown more enthusiastic, and much

features that differentiate them

broader every season. It’s one of our

from their poisonous look-alike, the

favorite things to do all together.

Out into the woods, and fields, with

The dangerous ones were the same

all the risks and dangers, carefully

color but certain to make you sick

foraging where we’ve learned to

look. Now we know where the black

again. Growing in clumps, and not

trumpets grow. We know which trees

give chicken of the woods, and

wood, and not out of the soil. Hollow

sheep’s head. There are winter

stem instead of solid. With gills that

oysters growing right around the

are true, and not decurrent. Smelling

corner from the YMCA in Summit.

Puffballs on that old tree beside the

actually glowing in the dark! (We

confirmed one night with a batch

that we found on the banks beside

He kept reading. And asking. So eventually we went out looking.

Back home with half a dozen golden chanterelles, and about twenty

In New Jersey there are thousands of varieties of wild mushrooms that grow. And they are everywhere. In the fields and woods behind your house. On the old oak that is slowly dying. In the wood chips around your boxwoods. Beside the trails you hike. But you only see them if your eyes are open.

walk after a rainy week in July. Into the South Mountain reserve. Our newest mushroom field guide in hand. And we just picked one of every kind we saw. I didn’t tell Nate or his sister, but I’d

smaller cinnabar chanterelles we got out the frying pan. Mom was out. I cleaned the mushrooms in cool water. Re-read the identification features for this variety in both of Nate’s field guides. (Always require two sources of verification. Preferably three!) Cut them up. Butter and olive oil. Drop in the

mushrooms. Salt as they begin to sizzle and pop. White wine. Not

YOU’VE JUST GOT TO GO OUT INTO THE WILD. AND KEEP YOUR EYES OPEN.

cooking wine. But the kind you’d like to drink on a hot July afternoon. Some crushed garlic. And onto the plate.

planned on throwing out the bag before we got back into the car. But then, beside a bend in the path, poking up between the leaf litter near a great big oak tree, Nate spotted the brilliant yellow orange of a patch of Chanterelles. (Cantharellus lateritius to be precise. And precision matters here!) Gorgeous. Like flowers showing off. And eerie like something from an alien film.

It was scary. And risky. But we ate them. Me more than Nate. They were so delicious. Good enough to give up steak for if I could have these every day! I know you won’t believe it. But that’s only because you’ve never tasted them. by:

Pollock Journal | Issue 3: Where the Wild Things are

In this third issue of the Pollock Journal, Vanessa and everyone at Pollock Properties Group explores the "wild" real estate market and the wild inside us all. #CareServeGive 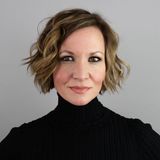