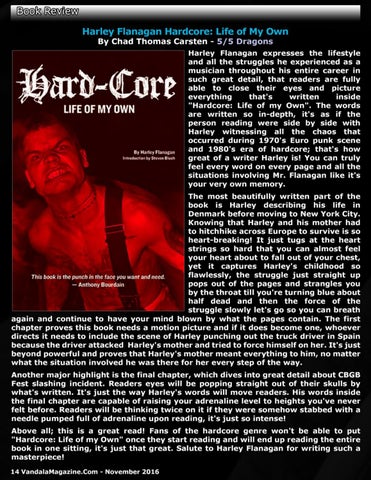 Harley Flanagan Hardcore: Life of My Own By Chad Thomas Carsten - 5/5 Dragons

LIFE OF MY OWN

Harley Flanagan expresses the lifestyle and all the struggles he experienced as a musician throughout his entire career in such great detail, that readers are fully able to close their eyes and picture everything that's written inside "Hardcore: Life of my Own". The words are written so in-depth, it's as if the person reading were side by side with Harley witnessing all the chaos that occurred during 1970's Euro punk scene and 1980's era of hardcore; that's how great of a writer Harley is! You can truly feel every word on every page and all the situations involving Mr. Flanagan like it's your very own memory.

The most beautifully written part of the book is Harley describing his life in Denmark before moving to New York City. Knowing that Harley and his mother had to hitchhike across Europe to survive is so heart-breaking! It just tugs at the heart strings so hard that you can almost feel your heart about to fall out of your chest, yet it captures Harley's childhood so flawlessly, the struggle just straight up This book is the punch in the face you want and need. pops out of the pages and strangles you â&#x20AC;&#x201D; Anthony Bourcbin by the throat till you're turning blue about half dead and then the force of the struggle slowly let's go so you can breath again and continue to have your mind blown by what the pages contain. The first chapter proves this book needs a motion picture and if it does become one, whoever directs it needs to include the scene of Harley punching out the truck driver in Spain because the driver attacked Marley's mother and tried to force himself on her. It's just beyond powerful and proves that Harley's mother meant everything to him, no matter what the situation involved he was there for her every step of the way. Another major highlight is the final chapter, which dives into great detail about CBGB Fest slashing incident. Readers eyes will be popping straight out of their skulls by what's written. It's just the way Harley's words will move readers. His words inside the final chapter are capable of raising your adrenaline level to heights you've never felt before. Readers will be thinking twice on it if they were somehow stabbed with a needle pumped full of adrenaline upon reading, it's just so intense! Above all; this is a great read! Fans of the hardcore genre won't be able to put "Hardcore: Life of my Own" once they start reading and will end up reading the entire book in one sifting, it's just that great. Salute to Harley Flanagan for writing such a masterpiece! 14 VandalaMagazine.Com - November 2016

What better way to head into November than with live music, books and new releases. First off we had a great interview with John Nolan of Ta...

What better way to head into November than with live music, books and new releases. First off we had a great interview with John Nolan of Ta...