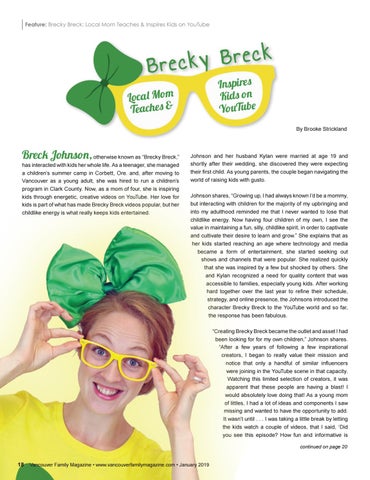 has interacted with kids her whole life. As a teenager, she managed a children’s summer camp in Corbett, Ore. and, after moving to Vancouver as a young adult, she was hired to run a children’s program in Clark County. Now, as a mom of four, she is inspiring kids through energetic, creative videos on YouTube. Her love for kids is part of what has made Brecky Breck videos popular, but her childlike energy is what really keeps kids entertained.

Johnson and her husband Kylan were married at age 19 and shortly after their wedding, she discovered they were expecting their first child. As young parents, the couple began navigating the world of raising kids with gusto. Johnson shares, “Growing up, I had always known I’d be a mommy, but interacting with children for the majority of my upbringing and into my adulthood reminded me that I never wanted to lose that childlike energy. Now having four children of my own, I see the value in maintaining a fun, silly, childlike spirit, in order to captivate and cultivate their desire to learn and grow.” She explains that as her kids started reaching an age where technology and media became a form of entertainment, she started seeking out shows and channels that were popular. She realized quickly that she was inspired by a few but shocked by others. She and Kylan recognized a need for quality content that was accessible to families, especially young kids. After working hard together over the last year to refine their schedule, strategy, and online presence, the Johnsons introduced the character Brecky Breck to the YouTube world and so far, the response has been fabulous. “Creating Brecky Breck became the outlet and asset I had been looking for for my own children,” Johnson shares. “After a few years of following a few inspirational creators, I began to really value their mission and notice that only a handful of similar influencers were joining in the YouTube scene in that capacity. Watching this limited selection of creators, it was apparent that these people are having a blast! I would absolutely love doing that! As a young mom of littles, I had a lot of ideas and components I saw missing and wanted to have the opportunity to add. It wasn’t until . . . I was taking a little break by letting the kids watch a couple of videos, that I said, ‘Did you see this episode? How fun and informative is continued on page 20 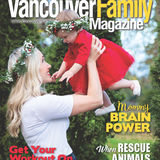 The magazine for Southwest Washington families.

The magazine for Southwest Washington families.