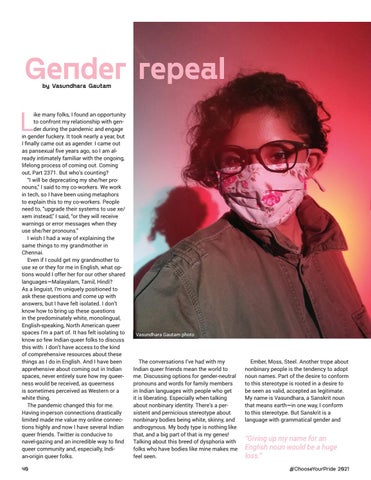 ike many folks, I found an opportunity to confront my relationship with gender during the pandemic and engage in gender fuckery. It took nearly a year, but I finally came out as agender. I came out as pansexual five years ago, so I am already intimately familiar with the ongoing, lifelong process of coming out. Coming out, Part 2371. But who’s counting? “I will be deprecating my she/her pronouns,” I said to my co-workers. We work in tech, so I have been using metaphors to explain this to my co-workers. People need to, “upgrade their systems to use xe/ xem instead,” I said, “or they will receive warnings or error messages when they use she/her pronouns.” I wish I had a way of explaining the same things to my grandmother in Chennai. Even if I could get my grandmother to use xe or they for me in English, what options would I offer her for our other shared languages—Malayalam, Tamil, Hindi? As a linguist, I’m uniquely positioned to ask these questions and come up with answers, but I have felt isolated. I don’t know how to bring up these questions in the predominately white, monolingual, English-speaking, North American queer spaces I’m a part of. It has felt isolating to know so few Indian queer folks to discuss this with. I don’t have access to the kind of comprehensive resources about these things as I do in English. And I have been apprehensive about coming out in Indian spaces, never entirely sure how my queerness would be received, as queerness is sometimes perceived as Western or a white thing. The pandemic changed this for me. Having in-person connections drastically limited made me value my online connections highly and now I have several Indian queer friends. Twitter is conducive to navel-gazing and an incredible way to find queer community and, especially, Indian-origin queer folks.

The conversations I’ve had with my Indian queer friends mean the world to me. Discussing options for gender-neutral pronouns and words for family members in Indian languages with people who get it is liberating. Especially when talking about nonbinary identity. There’s a persistent and pernicious stereotype about nonbinary bodies being white, skinny, and androgynous. My body type is nothing like that, and a big part of that is my genes! Talking about this breed of dysphoria with folks who have bodies like mine makes me feel seen.

“Giving up my name for an English noun would be a huge loss.” #ChooseYourPride 2021 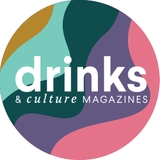