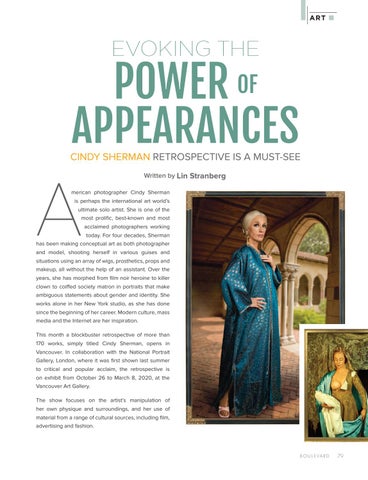 CINDY SHERMAN RETROSPECTIVE IS A MUST-SEE

merican photographer Cindy Sherman is perhaps the international art worldâ&#x20AC;&#x2122;s ultimate solo artist. She is one of the most prolific, best-known and most acclaimed photographers working today. For four decades, Sherman

has been making conceptual art as both photographer and model, shooting herself in various guises and situations using an array of wigs, prosthetics, props and makeup, all without the help of an assistant. Over the years, she has morphed from film noir heroine to killer clown to coiffed society matron in portraits that make ambiguous statements about gender and identity. She works alone in her New York studio, as she has done since the beginning of her career. Modern culture, mass media and the Internet are her inspiration. This month a blockbuster retrospective of more than 170 works, simply titled Cindy Sherman, opens in Vancouver. In collaboration with the National Portrait Gallery, London, where it was first shown last summer to critical and popular acclaim, the retrospective is on exhibit from October 26 to March 8, 2020, at the Vancouver Art Gallery. The show focuses on the artistâ&#x20AC;&#x2122;s manipulation of her own physique and surroundings, and her use of material from a range of cultural sources, including film, advertising and fashion. 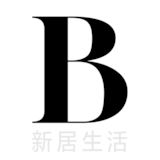