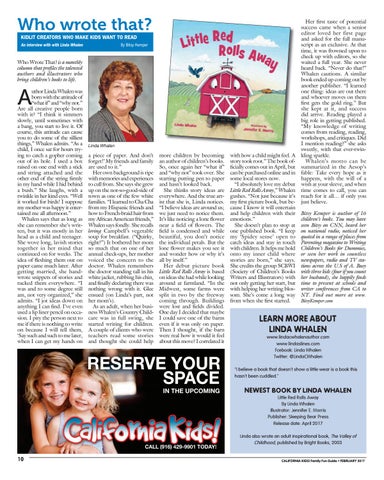 Who wrote that? KIDLIT CREATORS WHO MAKE KIDS WANT TO READ An interview with with Linda Whalen

Who Wrote That? is a monthly column that profiles the talented authors and illustrators who bring children’s books to life.

uthor Linda Whalen was born with the attitude of “what if” and “why not.” Are all creative people born with it? “I think it simmers slowly, until sometimes with a bang, you start to live it. Of course, this attitude can cause you to do some of the silliest things,” Whalen admits. “As a child, I once sat for hours trying to catch a gopher coming out of its hole. i used a box raised on one end with a stick and string attached and the other end of the string firmly in my hand while i hid behind a bush.” She laughs, with a twinkle in her kind eyes. “Well it worked for birds! I suppose my mother was happy it entertained me all afternoon.” Whalen says that as long as she can remember she’s written, but it was mostly in her head as a child and teenager. She wove long, lavish stories together in her mind that continued on for weeks. The idea of fleshing them out on paper came much later. After getting married, she handwrote snippets of stories and tucked them everywhere. “I was and to some degree still am, not very organized,” she admits. “i jot ideas down on anything I can find. I’ve even used a lip liner pencil on occasion. i pity the person next to me if there is nothing to write on because I will tell them, ‘Say such and such to me later, when i can get my hands on

a piece of paper. And don’t forget!’ My friends and family are used to it.” Her own background is ripe with memories and experiences to cull from. She says she grew up on the not-so-good-side of town as one of the few white families. “i learned to Cha Cha from my Hispanic friends and how to French-braid hair from my African American friends,” Whalen says fondly. She recalls loving Campbell’s vegetable soup for breakfast. (“Quirky, right?”) It bothered her mom so much that on one of her annual check-ups, her mother voiced the concern to the doctor. Whalen remembers the doctor standing tall in his white jacket, rubbing his chin, and finally declaring there was nothing wrong with it. Glee ensued (on Linda’s part, not her mom’s). As an adult, when her business Whalen’s Country Childcare was in full swing, she started writing for children. A couple of clients who were teachers read some stories and thought she could help

more children by becoming an author of children’s books. So, once again her “what if” and “why not” took over. She starting putting pen to paper and hasn’t looked back. She thinks story ideas are everywhere. And the true artist that she is, Linda notices. “i believe ideas are around us; we just need to notice them. It’s like noticing a lone flower near a field of flowers. The field is condensed and while beautiful, you don’t notice the individual petals. But the lone flower makes you see it and wonder how or why it’s all by itself.” Her debut picture book Little Red Rolls Away is based on ideas she had while looking around at farmland. “in the Midwest, some farms were split in two by the freeway coming through. Buildings were lost and fields divided. one day i decided that maybe i could save one of the barns even if it was only on paper. Then I thought, if the barn were real how it would it feel about this move? i correlated it

with how a child might feel. A story took root.” The book officially comes out in April, but can be purchased online and in some local stores now. “i absolutely love my debut Little Red Rolls Away,” Whalen gushes. “not just because it’s my first picture book, but because I know it will entertain and help children with their emotions.” She doesn’t plan to stop at one published book. “I keep my ‘Spidey sense’ open to catch ideas and stay in touch with children. it helps me hold onto my inner child where stories are born,” she says. She credits the group SCBWi (Society of Children’s Books Writers and illustrators) with not only getting her start, but with helping her writing blossom. She’s come a long way from when she first started.

Her first taste of potential success came when a senior editor loved her first page and asked for the full manuscript as an exclusive. At that time, it was frowned upon to check up with editors, so she waited a full year. She never heard back. “Never do that!” Whalen cautions. A similar book ended up coming out by another publisher. “i learned one thing: ideas are out there and whoever moves on them first gets the gold ring.” But she kept at it, and success did arrive. reading played a big role in getting published. “My knowledge of writing comes from reading, reading, workshops, and critiques. Did I mention reading?” she asks sweetly, with that ever-twinkling sparkle. Whalen’s motto can be summarized in the Aesop’s fable: Take every hope as it happens, with the will of a wish at your sleeve, and when time comes to call, you can reach for it all… if only you just believe. Bitsy Kemper is author of 16 children’s books. You may have seen Bitsy on CNN, heard her on national radio, noticed her quoted in a range of places from Parenting magazine to Writing Children’s Books for Dummies, or seen her work in countless newspapers, radio and TV stations across the U.S of A. Busy with three kids (four if you count her husband), she happily finds time to present at schools and writer conferences from CA to NY. Find out more at www. BitsyKemper.com

“I believe a book that doesn’t show a little wear is a book this hasn’t been cuddled.” 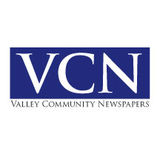