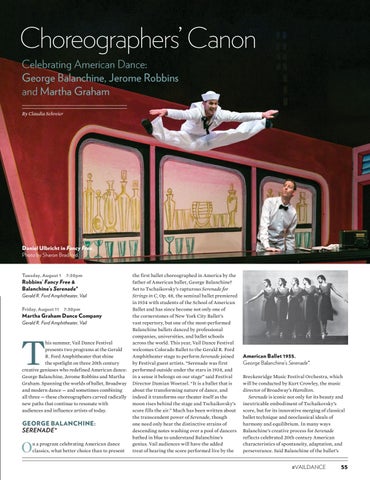 n a program celebrating American dance classics, what better choice than to present

the first ballet choreographed in America by the father of American ballet, George Balanchine? Set to Tschaikovsky’s rapturous Serenade for Strings in C, Op. 48, the seminal ballet premiered in 1934 with students of the School of American Ballet and has since become not only one of the cornerstones of New York City Ballet’s vast repertory, but one of the most-performed Balanchine ballets danced by professional companies, universities, and ballet schools across the world. This year, Vail Dance Festival welcomes Colorado Ballet to the Gerald R. Ford Amphitheater stage to perform Serenade joined by Festival guest artists. “Serenade was first performed outside under the stars in 1934, and in a sense it belongs on our stage” said Festival Director Damian Woetzel. “It is a ballet that is about the transforming nature of dance, and indeed it transforms our theater itself as the moon rises behind the stage and Tschaikovsky’s score fills the air.” Much has been written about the transcendent power of Serenade, though one need only hear the distinctive strains of descending notes washing over a pool of dancers bathed in blue to understand Balanchine’s genius. Vail audiences will have the added treat of hearing the score performed live by the

American Ballet 1935. George Balanchine’s Serenade*. Breckenridge Music Festival Orchestra, which will be conducted by Kurt Crowley, the music director of Broadway’s Hamilton. Serenade is iconic not only for its beauty and inextricable embodiment of Tschaikovsky’s score, but for its innovative merging of classical ballet technique and neoclassical ideals of harmony and equilibrium. In many ways Balanchine’s creative process for Serenade reflects celebrated 20th century American characteristics of spontaneity, adaptation, and perseverance. Said Balanchine of the ballet’s

The official program of the 2017 Vail Dance Festival with schedules, in-depth artist and venue information. 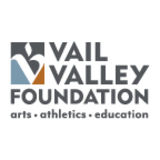