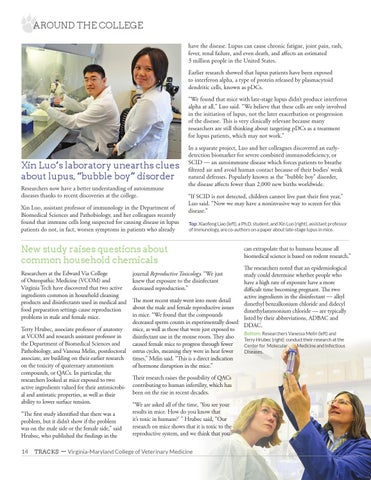 AROUND THE COLLEGE have the disease. Lupus can cause chronic fatigue, joint pain, rash, fever, renal failure, and even death, and affects an estimated 3 million people in the United States. Earlier research showed that lupus patients have been exposed to interferon alpha, a type of protein released by plasmacytoid dendritic cells, known as pDCs. “We found that mice with late-stage lupus didn’t produce interferon alpha at all,” Luo said. “We believe that these cells are only involved in the initiation of lupus, not the later exacerbation or progression of the disease. This is very clinically relevant because many researchers are still thinking about targeting pDCs as a treatment for lupus patients, which may not work.”

Xin Luo’s laboratory unearths clues about lupus, “bubble boy” disorder Researchers now have a better understanding of autoimmune diseases thanks to recent discoveries at the college. Xin Luo, assistant professor of immunology in the Department of Biomedical Sciences and Pathobiology, and her colleagues recently found that immune cells long suspected for causing disease in lupus patients do not, in fact, worsen symptoms in patients who already

In a separate project, Luo and her colleagues discovered an earlydetection biomarker for severe combined immunodeficiency, or SCID — an autoimmune disease which forces patients to breathe filtered air and avoid human contact because of their bodies’ weak natural defenses. Popularly known as the “bubble boy” disorder, the disease affects fewer than 2,000 new births worldwide. “If SCID is not detected, children cannot live past their first year,” Luo said. “Now we may have a noninvasive way to screen for this disease.” Top: Xiaofeng Liao (left), a Ph.D. student, and Xin Luo (right), assistant professor of immunology, are co-authors on a paper about late-stage lupus in mice.

New study raises questions about common household chemicals Researchers at the Edward Via College of Osteopathic Medicine (VCOM) and Virginia Tech have discovered that two active ingredients common in household cleaning products and disinfectants used in medical and food preparation settings cause reproduction problems in male and female mice. Terry Hrubec, associate professor of anatomy at VCOM and research assistant professor in the Department of Biomedical Sciences and Pathobiology, and Vanessa Melin, postdoctoral associate, are building on their earlier research on the toxicity of quaternary ammonium compounds, or QACs. In particular, the researchers looked at mice exposed to two active ingredients valued for their antimicrobial and antistatic properties, as well as their ability to lower surface tension. “The first study identified that there was a problem, but it didn’t show if the problem was on the male side or the female side,” said Hrubec, who published the findings in the 14

can extrapolate that to humans because all biomedical science is based on rodent research.”

The researchers noted that an epidemiological study could determine whether people who have a high rate of exposure have a more difficult time becoming pregnant. The two active ingredients in the disinfectant — alkyl The most recent study went into more detail dimethyl benzalkonium chloride and didecyl about the male and female reproductive issues dimethylammonium chloride — are typically in mice. “We found that the compounds listed by their abbreviations, ADBAC and decreased sperm counts in experimentally dosed DDAC. mice, as well as those that were just exposed to Bottom: Researchers Vanessa Melin (left) and disinfectant use in the mouse room. They also Terry Hrubec (right) conduct their research at the caused female mice to progress through fewer Center for Molecular Medicine and Infectious estrus cycles, meaning they were in heat fewer Diseases. times,” Melin said. “This is a direct indication of hormone disruption in the mice.” journal Reproductive Toxicology. “We just knew that exposure to the disinfectant decreased reproduction.”

Their research raises the possibility of QACs contributing to human infertility, which has been on the rise in recent decades. “We are asked all of the time, ‘You see your results in mice. How do you know that it’s toxic in humans?’ ” Hrubec said, “Our research on mice shows that it is toxic to the reproductive system, and we think that you 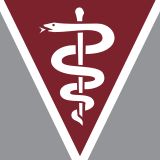 The flagship publication of the Virginia-Maryland College of Veterinary Medicine

The flagship publication of the Virginia-Maryland College of Veterinary Medicine