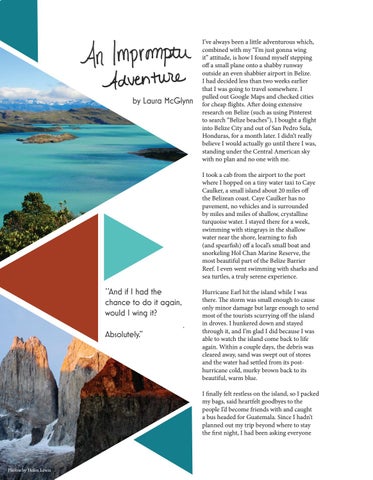 I’ve always been a little adventurous which, combined with my “I’m just gonna wing it” attitude, is how I found myself stepping off a small plane onto a shabby runway outside an even shabbier airport in Belize. I had decided less than two weeks earlier that I was going to travel somewhere. I pulled out Google Maps and checked cities for cheap flights. After doing extensive research on Belize (such as using Pinterest to search “Belize beaches”), I bought a flight into Belize City and out of San Pedro Sula, Honduras, for a month later. I didn’t really believe I would actually go until there I was, standing under the Central American sky with no plan and no one with me. I took a cab from the airport to the port where I hopped on a tiny water taxi to Caye Caulker, a small island about 20 miles off the Belizean coast. Caye Caulker has no pavement, no vehicles and is surrounded by miles and miles of shallow, crystalline turquoise water. I stayed there for a week, swimming with stingrays in the shallow water near the shore, learning to fish (and spearfish) off a local’s small boat and snorkeling Hol Chan Marine Reserve, the most beautiful part of the Belize Barrier Reef. I even went swimming with sharks and sea turtles, a truly serene experience.

‘‘And if I had the chance to do it again, would I wing it? Absolutely.”

Hurricane Earl hit the island while I was there. The storm was small enough to cause only minor damage but large enough to send most of the tourists scurrying off the island in droves. I hunkered down and stayed through it, and I’m glad I did because I was able to watch the island come back to life again. Within a couple days, the debris was cleared away, sand was swept out of stores and the water had settled from its posthurricane cold, murky brown back to its beautiful, warm blue. I finally felt restless on the island, so I packed my bags, said heartfelt goodbyes to the people I’d become friends with and caught a bus headed for Guatemala. Since I hadn’t planned out my trip beyond where to stay the first night, I had been asking everyone