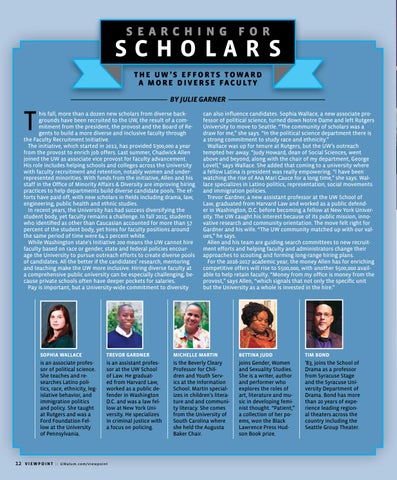 his fall, more than a dozen new scholars from diverse backgrounds have been recruited to the UW, the result of a commitment from the president, the provost and the Board of Regents to build a more diverse and inclusive faculty through the Faculty Recruitment Initiative. The initiative, which started in 2012, has provided $300,000 a year from the provost to enrich job offers. Last summer, Chadwick Allen joined the UW as associate vice provost for faculty advancement. His role includes helping schools and colleges across the University with faculty recruitment and retention, notably women and underrepresented minorities. With funds from the initiative, Allen and his staff in the Office of Minority Affairs & Diversity are improving hiring practices to help departments build diverse candidate pools. The efforts have paid off, with new scholars in fields including drama, law, engineering, public health and ethnic studies. In recent years, the University has had success diversifying the student body, yet faculty remains a challenge. In fall 2015, students who identified as other than Caucasian accounted for more than 57 percent of the student body, yet hires for faculty positions around the same period of time were 64.1 percent white. While Washington state’s Initiative 200 means the UW cannot hire faculty based on race or gender, state and federal policies encourage the University to pursue outreach efforts to create diverse pools of candidates. All the better if the candidates’ research, mentoring and teaching make the UW more inclusive. Hiring diverse faculty at a comprehensive public university can be especially challenging, because private schools often have deeper pockets for salaries. Pay is important, but a University-wide commitment to diversity

can also influence candidates. Sophia Wallace, a new associate professor of political science, turned down Notre Dame and left Rutgers University to move to Seattle. “The community of scholars was a draw for me,” she says. “In the political science department there is a strong commitment to study race and ethnicity.” Wallace was up for tenure at Rutgers, but the UW’s outreach tempted her away. “Judy Howard, dean of Social Sciences, went above and beyond, along with the chair of my department, George Lovell,” says Wallace. She added that coming to a university where a fellow Latina is president was really empowering. “I have been watching the rise of Ana Mari Cauce for a long time,” she says. Wallace specializes in Latino politics, representation, social movements and immigration policies. Trevor Gardner, a new assistant professor at the UW School of Law, graduated from Harvard Law and worked as a public defender in Washington, D.C. before becoming a fellow at New York University. The UW caught his interest because of its public mission, innovative research and community orientation. The move felt right for Gardner and his wife. “The UW community matched up with our values,” he says. Allen and his team are guiding search committees to new recruitment efforts and helping faculty and administrators change their approaches to scouting and forming long-range hiring plans. For the 2016-2017 academic year, the money Allen has for enriching competitive offers will rise to $500,000, with another $500,000 available to help retain faculty. “Money from my office is money from the provost,” says Allen, “which signals that not only the specific unit but the University as a whole is invested in the hire.”

is an associate professor of political science. She teaches and researches Latino politics, race, ethnicity, legislative behavior, and immigration politics and policy. She taught at Rutgers and was a Ford Foundation Fellow at the University of Pennsylvania.

is an assistant professor at the UW School of Law. He graduated from Harvard Law, worked as a public defender in Washington D.C. and was a law fellow at New York University. He specializes in criminal justice with a focus on policing.

is the Beverly Cleary Professor for Children and Youth Servics at the Information School. Martin specializes in children's literature and and community literacy. She comes from the University of South Carolina where she held the Augusta Baker Chair.

joins Gender, Women and Sexuality Studies. She is a writer, author and performer who explores the roles of art, literature and music in developing feminist thought. “Patient,” a collection of her poems, won the Black Lawrence Press Hudson Book prize.

’83, joins the School of Drama as a professor from Syracuse Stage and the Syracuse University Department of Drama. Bond has more than 20 years of experience leading regional theaters across the country including the Seattle Group Theater. 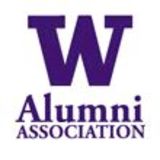 In this issue: Students use their spring breaks to reach children on reservations and in small towns across the state. A diverse group of ne...

In this issue: Students use their spring breaks to reach children on reservations and in small towns across the state. A diverse group of ne...