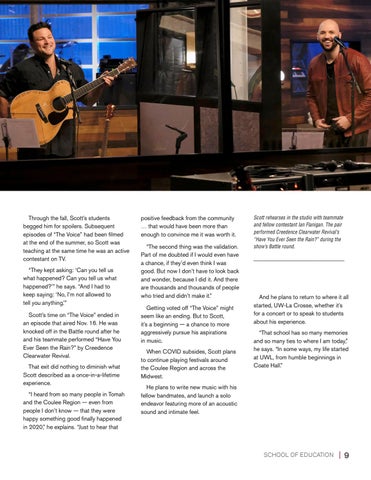 Through the fall, Scott’s students begged him for spoilers. Subsequent episodes of “The Voice” had been filmed at the end of the summer, so Scott was teaching at the same time he was an active contestant on TV. “They kept asking: ‘Can you tell us what happened? Can you tell us what happened?’” he says. “And I had to keep saying: ‘No, I’m not allowed to tell you anything.’” Scott’s time on “The Voice” ended in an episode that aired Nov. 16. He was knocked off in the Battle round after he and his teammate performed “Have You Ever Seen the Rain?” by Creedence Clearwater Revival. That exit did nothing to diminish what Scott described as a once-in-a-lifetime experience. “I heard from so many people in Tomah and the Coulee Region — even from people I don’t know — that they were happy something good finally happened in 2020,” he explains. “Just to hear that

positive feedback from the community … that would have been more than enough to convince me it was worth it. “The second thing was the validation. Part of me doubted if I would even have a chance, if they’d even think I was good. But now I don’t have to look back and wonder, because I did it. And there are thousands and thousands of people who tried and didn’t make it.” Getting voted off “The Voice” might seem like an ending. But to Scott, it’s a beginning — a chance to more aggressively pursue his aspirations in music. When COVID subsides, Scott plans to continue playing festivals around the Coulee Region and across the Midwest.

And he plans to return to where it all started, UW-La Crosse, whether it’s for a concert or to speak to students about his experience. “That school has so many memories and so many ties to where I am today,” he says. “In some ways, my life started at UWL, from humble beginnings in Coate Hall.”

He plans to write new music with his fellow bandmates, and launch a solo endeavor featuring more of an acoustic sound and intimate feel.