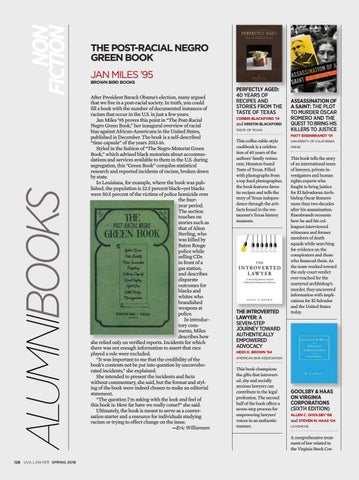 After President Barack Obama’s election, many argued that we live in a post-racial society. In truth, you could fill a book with the number of documented instances of racism that occur in the U.S. in just a few years. Jan Miles ’95 proves this point in “The Post-Racial Negro Green Book,” her inaugural overview of racial bias against African-Americans in the United States, published in December. The book is a self-described “time capsule” of the years 2013-16. Styled in the fashion of “The Negro Motorist Green Book,” which advised black motorists about accommodations and services available to them in the U.S. during segregation, this “Green Book” compiles statistical research and reported incidents of racism, broken down by state. In Louisiana, for example, where the book was published, the population is 32.5 percent black—yet blacks were 50.5 percent of the victims of police homicide over the fouryear period. The section touches on stories such as that of Alton Sterling, who was killed by Baton Rouge police while selling CDs in front of a gas station, and describes disparate outcomes for blacks and whites who brandished weapons at police. In introductory comments, Miles describes how she relied only on verified reports. Incidents for which there was not enough information to assert that race played a role were excluded. “It was important to me that the credibility of the book’s contents not be put into question by uncorroborated incidents,” she explained. She intended to present the incidents and facts without commentary, she said, but the format and styling of the book were indeed chosen to make an editorial statement. “The question I’m asking with the look and feel of this book is: How far have we really come?” she said. Ultimately, the book is meant to serve as a conversation starter and a resource for individuals studying racism or trying to effect change on the issue. —Eric Williamson

PERFECTLY AGED: 40 YEARS OF RECIPES AND STORIES FROM THE TASTE OF TEXAS CORBIN BLACKFORD ’14

and KRISTIN BLACKFORD TASTE OF TEXAS

ASSASSINATION OF A SAINT: THE PLOT TO MURDER ÓSCAR ROMERO AND THE QUEST TO BRING HIS KILLERS TO JUSTICE MATT EISENBRANDT ’01

This coffee-table-style cookbook is a celebration of 40 years of the authors’ family restaurant, Houston-based Taste of Texas. Filled with photographs from a top food photographer, the book features favorite recipes and tells the story of Texas independence through the artifacts found in the restaurant’s Texas history museum.

THE INTROVERTED LAWYER: A SEVEN-STEP JOURNEY TOWARD AUTHENTICALLY EMPOWERED ADVOCACY

This book tells the story of an international team of lawyers, private investigators and human rights experts who fought to bring justice for El Salvadoran Archbishop Óscar Romero more than two decades after his assassination. Eisenbrandt recounts how he and his colleagues interviewed witnesses and former members of death squads while searching for evidence on the conspirators and those who financed them. As the team worked toward the only court verdict ever reached for the martyred archbishop’s murder, they uncovered information with implications for El Salvador and the United States today.

This book champions the gifts that introverted, shy and socially anxious lawyers can contribute to the legal profession. The second half of the book offers a seven-step process for empowering lawyers’ voices in an authentic manner.

A comprehensive treatment of law related to the Virginia Stock Cor- 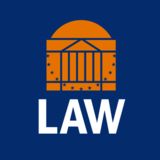 University of Virginia School of Law

This issue of UVA Lawyer focuses on the legacy of black students and alumni. The magazine offers news about the Law School and alumni.

This issue of UVA Lawyer focuses on the legacy of black students and alumni. The magazine offers news about the Law School and alumni.