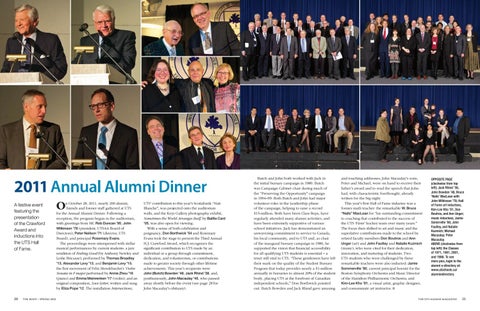 2011 Annual Alumni Dinner A festive event featuring the presentation of the Crawford Award and inductions into the UTS Hall of Fame.

UTS’ contribution to this year’s Scotiabank “Nuit Blanche”, was projected onto the auditorium walls, and the Keys Gallery photography exhibit, Sometimes the World Arranges Itself, by Baillie Card ’05, was also open for viewing. With a sense of both celebration and poignancy, Don Borthwick ’54 and Rosemary Evans took the stage to present the Third Annual H.J. Crawford Award, which recognizes the significant contribution to UTS made by an individual or a group through commitment, dedication, and volunteerism, or contributions made to greater society through other lifetime achievements. This year’s recipients were John (Butch) Bowden ’48, Jack Rhind ’38, and, posthumously, John Macaulay ’45, who passed away shortly before the event (see page 28 for John Macaulay’s obituary).

Butch and John both worked with Jack in the initial bursary campaign in 1980. Butch was Campaign Cabinet chair during much of the “Preserving the Opportunity” campaign in 1994–99. Both Butch and John had major volunteer roles in the Leadership phase of the campaign, helping to raise a record $15-million. Both have been Class Reps, have regularly attended many alumni activities, and have been extremely supportive of various school initiatives. Jack has demonstrated an unwavering commitment to service to Canada, his local community, and to UTS and, as chair of the inaugural bursary campaign in 1980, he supported the vision that financial accessibility for all qualifying UTS students is essential – a tenet still vital to UTS. “These gentlemen have left their mark on the quality of the Student Bursary Program that today provides nearly a $1-million annually in bursaries to almost 20% of the student body, placing UTS at the forefront of Canadian independent schools,” Don Borthwick pointed out. Butch Bowden and Jack Rhind gave amusing

and touching addresses; John Macaulay’s sons, Peter and Michael, were on hand to receive their father’s award and to read the speech that John had, with characteristic forethought, already written for the big night. This year’s first Hall of Fame inductee was a former math teacher: the remarkable W. Bruce “Nails” MacLean for “his outstanding commitment to coaching that contributed to the success of the UTS ‘Firsts’ hockey team over many years.” The focus then shifted to art and music and the superlative contributions made to the school by retired faculty members Don Boutros and Ann Unger (art) and John Fautley and Natalie Kuzmich (music), who were cited for their dedication, innovation, and nurturing of students. Two UTS students who were challenged by these remarkable teachers were also inducted: Jamie Sommerville ’80, current principal hornist for the Boston Symphony Orchestra and Music Director of the Hamilton Philharmonic Orchestra; and Kim‑Lee Kho ’81, a visual artist, graphic designer, and consummate art instructor. n 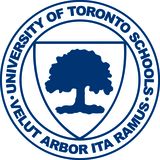