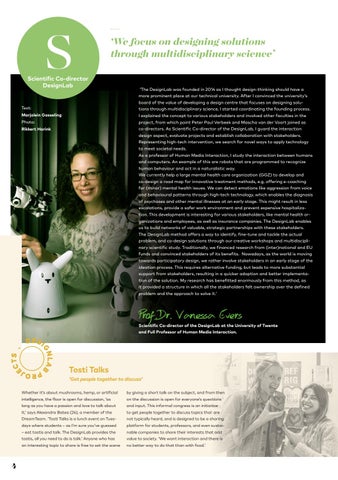 ‘We focus on designing solutions through multidisciplinary science’

‘The DesignLab was founded in 2014 as I thought design-thinking should have a more prominent place at our technical university. After I convinced the university’s board of the value of developing a design centre that focuses on designing solu-

tions through multidisciplinary science, I started coordinating the founding process.

co-directors. As Scientific Co-director of the DesignLab, I guard the interaction design aspect, evaluate projects and establish collaboration with stakeholders. Representing high-tech intervention, we search for novel ways to apply technology to meet societal needs. As a professor of Human Media Interaction, I study the interaction between humans and computers. An example of this are robots that are programmed to recognize human behaviour and act in a naturalistic way. We currently help a large mental health care organization (GGZ) to develop and co-design a road map for innovative treatment methods, e.g. offering e-coaching for (minor) mental health issues. We can detect emotions like aggression from voice and behavioural patterns through high-tech technology, which enables the diagnosis of psychoses and other mental illnesses at an early stage. This might result in less escalations, provide a safer work environment and prevent expensive hospitalization. This development is interesting for various stakeholders, like mental health organizations and employees, as well as insurance companies. The DesignLab enables us to build networks of valuable, strategic partnerships with these stakeholders. The DesignLab method offers a way to identify, fine-tune and tackle the actual problem, and co-design solutions through our creative workshops and multidisciplinary scientific study. Traditionally, we financed research from (inter)national and EU funds and convinced stakeholders of its benefits. Nowadays, as the world is moving towards participatory design, we rather involve stakeholders in an early stage of the ideation process. This requires alternative funding, but leads to more substantial support from stakeholders, resulting in a quicker adoption and better implementation of the solution. My research has benefitted enormously from this method, as it provided a structure in which all the stakeholders felt ownership over the defined problem and the approach to solve it.’

Scientific Co-director of the DesignLab at the University of Twente and Full Professor of Human Media Interaction.

Tosti Talks ‘Get people together to discuss’

Whether it’s about mushrooms, hemp, or artificial

by giving a short talk on the subject, and from then

intelligence, the floor is open for discussion, ‘as

on the discussion is open for everyone’s questions

long as you have a passion and love to talk about

and input. This informal congress is an initiative

to get people together to discuss topics that are

DreamTeam. ‘Tosti Talks is a lunch event on Tues-

not typically heard, and is designed to be a sharing

days where students – as I’m sure you’ve guessed

platform for students, professors, and even sustai-

– eat tostis and talk. The DesignLab provides the

tostis, all you need to do is talk.’ Anyone who has

value to society. ‘We want interaction and there is

an interesting topic to share is free to set the scene

no better way to do that than with food.’