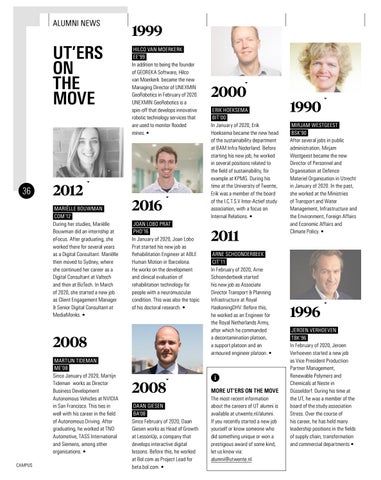 1999 HILCO VAN MOERKERK EE’99 In addition to being the founder of GEOREKA Software, Hilco van Moerkerk became the new Managing Director of UNEXMIN GeoRobotics in February of 2020. UNEXMIN GeoRobotics is a spin-off that develops innovative robotic technology services that are used to monitor flooded mines. •

2016 JOAN LOBO PRAT PHD’16 In January of 2020, Joan Lobo Prat started his new job as Rehabilitation Engineer at ABLE Human Motion in Barcelona. He works on the development and clinical evaluation of rehabilitation technology for people with a neuromuscular condition. This was also the topic of his doctoral research. •

2008 MARTIJN TIDEMAN ME’08 Since January of 2020, Martijn Tideman works as Director Business Development Autonomous Vehicles at NVIDIA in San Francisco. This ties in well with his career in the field of Autonomous Driving. After graduating, he worked at TNO Automotive, TASS International and Siemens, among other organisations. • CAMPUS

2008 DAAN GIESEN BA’08 Since February of 2020, Daan Giesen works as Head of Growth at LessonUp, a company that develops interactive digital lessons. Before this, he worked at Bol.com as Project Lead for beta.bol.com. •

2000 ERIK HOEKSEMA BIT’00 In January of 2020, Erik Hoeksema became the new head of the sustainability department at BAM Infra Nederland. Before starting his new job, he worked in several positions related to the field of sustainability, for example at KPMG. During his time at the University of Twente, Erik was a member of the board of the I.C.T.S.V Inter-Actief study association, with a focus on Internal Relations. •

2011 ARNE SCHOONDERBEEK CIT’11 In February of 2020, Arne Schoonderbeek started his new job as Associate Director Transport &amp; Planning Infrastructure at Royal HaskoningDHV. Before this, he worked as an Engineer for the Royal Netherlands Army, after which he commanded a decontamination platoon, a support platoon and an armoured engineer platoon. •

MORE UT’ERS ON THE MOVE The most recent information about the careers of UT alumni is available at utwente.nl/alumni. If you recently started a new job yourself or know someone who did something unique or won a prestigious award of some kind, let us know via: alumni@utwente.nl

1990 MIRJAM WESTGEEST BSK’90 After several jobs in public administration, Mirjam Westgeest became the new Director of Personnel and Organisation at Defence Materiel Organisation in Utrecht in January of 2020. In the past, she worked at the Ministries of Transport and Water Management, Infrastructure and the Environment, Foreign Affairs and Economic Affairs and Climate Policy. •

1996 JEROEN VERHOEVEN TBK’96 In February of 2020, Jeroen Verhoeven started a new job as Vice President Production Partner Management, Renewable Polymers and Chemicals at Neste in Düsseldorf. During his time at the UT, he was a member of the board of the study association Stress. Over the course of his career, he has held many leadership positions in the fields of supply chain, transformation and commercial departments •

This is the first edition of Campus, a magazine conceptualised and created by U-Today and the University of Twente Marketing & Communication department. The magazine is the joint successor of two magazines: the Science & Technology Magazine of U-Today and the Alumni and Relations Magazine of the UT. Through stories about education, research, entrepreneurship, student life and alumni, we bring different groups together. In this first edition you will read, among other articles: - An extensive look at the phenomenon 'campus' - Working from home in times of corona - An in-depth interview with Professor Detlef Lohse - Columns by Wiendelt Steenbergen and Hiska Bakker - Out of Office: All-weather Research - Alumnus and 'Chief Soap Officer' Marcel Belt - And of course much, much more...