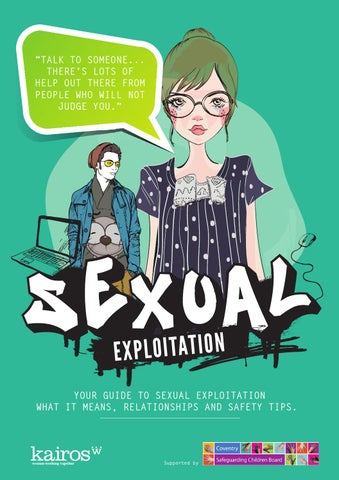 “TALK TO SOMEONE... THERE’S LOTS OF HELP OUT THERE FROM PEOPLE WHO WILL NOT JUDGE YOU.”

E X P L O I TAT I O N YOUR GUIDE TO SEXUAL EXPLOITATION WHAT IT MEANS, RELATIONSHIPS AND SAFETY TIPS.

E X P L O I TAT I O N Child sexual exploitation is where someone uses power over a young person to sexually abuse them. Sexual exploitation is something that can happen to anyone regardless of their gender, ethnicity or age. The UK Government uses the following definition: The sexual exploitation of children and young people under 18 involves exploitative situations, contexts and relationships. This may be where young people (or a third person or persons) receive ‘something’ (e.g. food, accommodation, drugs, alcohol, cigarettes, affection, gifts, money) as a result of performing, and/or others performing on them, sexual activities. Child sexual exploitation can occur through use of technology without the child’s immediate recognition For example the persuasion to post sexual images on the internet/mobile phones with no immediate payment or gain. In all cases, those exploiting the child/young person have power over them by virtue of their age, gender, intellect, physical strength and/or economic or other resources.

Giving consent is saying “yes”. To be able to say “yes”, you need to be able to make a REAL choice. You are able to give consent to a sexual activity if you agree by CHOICE, and have the FREEDOM and CAPACITY to make that choice. (Source: Sexual Offences Act 2003)There may be times where you do not have the choice, freedom or capacity to make a choice. Below are some examples of when someone would not have capacity. CHOICE You would not have choice if you were: Threatened / Blackmailed / Pressurised / Manipulated FREEDOM You would not have freedom if you were: Tied up / Locked in a room / Forced / Kidnapped CAPACITY You would not have capacity if you were: Drunk / Asleep / Unconscious / Under the influence of drugs / Having a mental health crisis Underage (sexual age of consent is 16) / Someone who has a learning difficulty that makes it difficult to make decisions

Grooming is where someone tries to befriend a young person with the aim of sexually abusing them. There is often an exchange of something (affection, drugs, money, food, place to stay) for the sexual activity. To the right is an example of the way this might happen.(Adapted from: Barnardos, BWise 2, Sexual Exploitation, 2007)

Ideally, relationships would be full of love, respect, trust and honesty. Unfortunately, some people are in relationships that are abusive. Outlined below are some of the ways someone can be domestically abusive:

FINA NCI AL • Taking your money • Not letting you work. • Controlling how you spend your money.

Do you know how to stay safe online and on your phone? The table below shows you some of the risks of using social media and how you can reduce those risks/ take action.

BUL LYIN G SOMEONE USING SOCIAL MEDIA TO UPSET SOMEONE ELSE. Try to block the bully on IM or delete then from your contacts. Speak to someone you trust, for example, parent, teacher, youth worker. Try not to retaliate as this might make things worse. Keep texts, emails etc as proof of the bullying; the police may be able to charge the bully with harassment or threatening behaviour.

GRO OMI NG SOMEONE BEFRIENDS YOU ONLINE OR VIA IM BECAUSE THEY WANT TO SEXUALLY ABUSE YOU. Only speak to people you know online or via IM (strangers may not be who they say they are). Keep personal information private as people could use this to try and start a friendship or find out where you live/ hang out. Meeting someone from the internet can be dangerous; always let an adult know where you are going, never go alone and meet in a crowded place. If someone is acting oddly online, contact CEOP.

SEX TIN G SENDING AN INDECENT (SEXUAL) PICTURE OF YOURSELF TO SOMEONE ELSE VIA SOCIAL MEDIA. Once pictures are sent to someone else you are unable to control who sees them. They could be sent to your friends, family or be put on the internet for the whole world to see. They could be used to blackmail you into doing things you are not happy about (e.g. sexual acts). The safest thing you can do is not to send this type of picture. If pictures are posted of you online, contact CEOP.

T IP S Always let someone know where you

Carry a charged mobile phone but

are going and what time to expect you back; this could be someone

keep it out of sight.

you live with, a friend or a family member. Do not give out personal information to people you do not know (BBM pin, phone numbers, address etc). Always use licensed taxi cabs; these will have a plaque on the back of the taxi issued by Coventry City Council.

Keep some spare cash in case you need to get a taxi/ bus. Avoid walking in quiet, poorly lit areas. Do not listen to music when walking alone. Do not accept lifts from strangers or people you feel unsure about. Think about why someone might be offering you a gift. What is their reason for doing it? See page 5. Do not accept drinks unless you see the drink being poured / opened yourself. Always journey home with a friend Walk facing oncoming traffic to avoid people pulling over to talk to you. Avoid walking past parked vehicles with their engines running.

1 in 4 women will experience domestic abuse in their lifetime.

If you carry a knife y are mor ou e likel y to be stabbed yoursel f.

When I was a child I used to hide in the corner of my bedroom waiting for my dad to come and hit me. The violence had been going on for a number of years, so I ran away from home and slept outside. I was hungry, thirsty and very cold. It was very lonely. I was walking down the road the next evening when I saw a girl my age. She told me that she had run away from a children’s home and had a family in Wolverhampton who I could stay with. I thought it sounded exciting and that it would be somewhere warm to stay. I thought that this girl was very friendly and would make good company, someone who I could have a laugh with. When I reached Wolverhampton, my life changed for the worse. We went into a taxi and on arrival at our destination she told me to wait in the taxi for her while she knocked on the door. She went and then appeared with two other women who shouted at her, asking why she knocked on the door and ran away. I didn’t understand what was happening.

I was confused and really scared. One of the women was tall in jeans and the other woman was tall and voluptuous, wearing a really short skirt. The larger of the two dragged me from the taxi and thumped me in the eye. I was in a lot of pain and was crying so much. Little did I know that it was going to get a lot worse. The blonde girl and the tall slim girl were laughing and joking and here I was with a tear stained face and a black eye. I didn’t know what was going to happen next. The larger woman told me that I would do whatever she said; otherwise she would really hurt me. I was so scared. She took me to a corner and I waited. A man came and she told me I had to do what he wanted.

“I WAS TOO SCARED TO SAY NO TO HER AND HAD TO DO SEXUAL THINGS I HAD NEVER DONE BEFORE. I TOLD HIM I DIDN’T WANT TO DO THIS AND PLEASE GET ME HELP, BUT HE SAID HE DIDN’T WANT TO GET INVOLVED.” That single day changed who I was. I kept things to myself for a long time, but that only made things worse. I just hoped that everything would go away, but it didn't. I knew I needed help. I started going to a group and my life began to change for the better. I started to gain confidence and realised that I wasn't on my own and that other people had been through the same ordeal as I had. I also had a great Support Worker who helped me with practical issues and helped me to start to deal with the problems I faced. I now have a very bright future ahead of me.

Kairos WWT Support for women over 18 at risk of or subject to sexual exploitation Brook Advice on sexual health, pregnancy and abortion Telephone: 0808 802 1234

This booklet was written and produced by Kairos WWT. 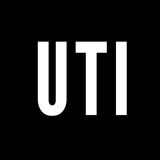