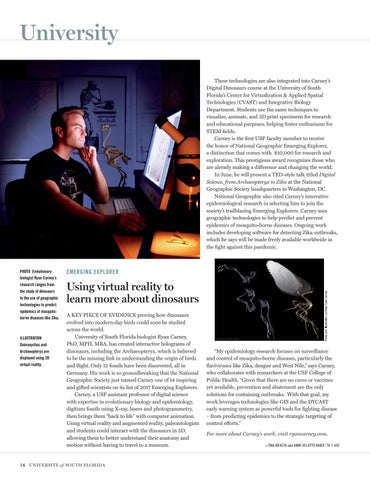 University These technologies are also integrated into Carney’s Digital Dinosaurs course at the University of South Florida’s Center for Virtualization &amp; Applied Spatial Technologies (CVAST) and Integrative Biology Department. Students use the same techniques to visualize, animate, and 3D print specimens for research and educational purposes, helping foster enthusiasm for STEM fields. Carney is the first USF faculty member to receive the honor of National Geographic Emerging Explorer, a distinction that comes with $10,000 for research and exploration. This prestigious award recognizes those who are already making a difference and changing the world. In June, he will present a TED-style talk titled Digital Science, from Archaeopteryx to Zika at the National Geographic Society headquarters in Washington, DC. National Geographic also cited Carney’s innovative epidemiological research in selecting him to join the society’s trailblazing Emerging Explorers. Carney uses geographic technologies to help predict and prevent epidemics of mosquito-borne diseases. Ongoing work includes developing software for detecting Zika outbreaks, which he says will be made freely available worldwide in the fight against this pandemic.

Using virtual reality to learn more about dinosaurs A KEY PIECE OF EVIDENCE proving how dinosaurs evolved into modern-day birds could soon be studied across the world. University of South Florida biologist Ryan Carney, PhD, MPH, MBA, has created interactive holograms of dinosaurs, including the Archaeopteryx, which is believed to be the missing link in understanding the origin of birds and flight. Only 12 fossils have been discovered, all in Germany. His work is so groundbreaking that the National Geographic Society just named Carney one of 14 inspiring and gifted scientists on its list of 2017 Emerging Explorers. Carney, a USF assistant professor of digital science with expertise in evolutionary biology and epidemiology, digitizes fossils using X-ray, lasers and photogrammetry, then brings them “back to life” with computer animation. Using virtual reality and augmented reality, paleontologists and students could interact with the dinosaurs in 3D, allowing them to better understand their anatomy and motion without having to travel to a museum.

PHOTO Evolutionary biologist Ryan Carney’s research ranges from the study of dinosaurs to the use of geographic technologies to predict epidemics of mosquitoborne diseases like Zika.

“My epidemiology research focuses on surveillance and control of mosquito-borne diseases, particularly the flaviviruses like Zika, dengue and West Nile,” says Carney, who collaborates with researchers at the USF College of Public Health. “Given that there are no cures or vaccines yet available, prevention and abatement are the only solutions for containing outbreaks. With that goal, my work leverages technologies like GIS and the DYCAST early warning system as powerful tools for fighting disease – from predicting epidemics to the strategic targeting of control efforts.” For more about Carney’s work, visit ryancarney.com. – TINA MEKETA and ANNE DELOTTO BAIER ’78 | USF