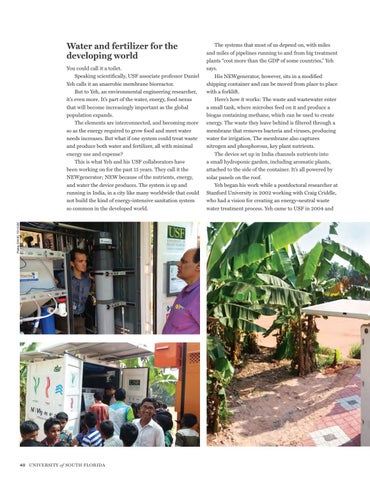 Water and fertilizer for the developing world

You could call it a toilet. Speaking scientifically, USF associate professor Daniel Yeh calls it an anaerobic membrane bioreactor. But to Yeh, an environmental engineering researcher, it’s even more. It’s part of the water, energy, food nexus that will become increasingly important as the global population expands. The elements are interconnected, and becoming more so as the energy required to grow food and meet water needs increases. But what if one system could treat waste and produce both water and fertilizer, all with minimal energy use and expense? This is what Yeh and his USF collaborators have been working on for the past 15 years. They call it the NEWgenerator; NEW because of the nutrients, energy, and water the device produces. The system is up and running in India, in a city like many worldwide that could not build the kind of energy-intensive sanitation system so common in the developed world.

The systems that most of us depend on, with miles and miles of pipelines running to and from big treatment plants “cost more than the GDP of some countries,” Yeh says. His NEWgenerator, however, sits in a modified shipping container and can be moved from place to place with a forklift. Here’s how it works: The waste and wastewater enter a small tank, where microbes feed on it and produce a biogas containing methane, which can be used to create energy. The waste they leave behind is filtered through a membrane that removes bacteria and viruses, producing water for irrigation. The membrane also captures nitrogen and phosphorous, key plant nutrients. The device set up in India channels nutrients into a small hydroponic garden, including aromatic plants, attached to the side of the container. It’s all powered by solar panels on the roof. Yeh began his work while a postdoctoral researcher at Stanford University in 2002 working with Craig Criddle, who had a vision for creating an energy-neutral waste water treatment process. Yeh came to USF in 2004 and