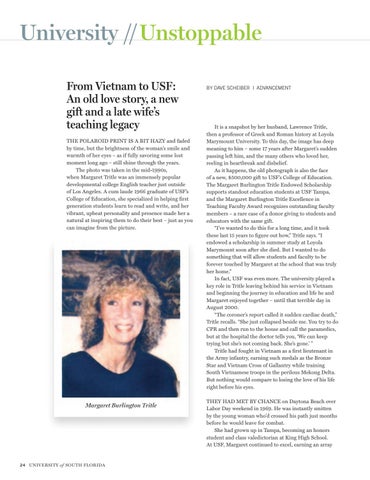 University // Unstoppable From Vietnam to USF: An old love story, a new gift and a late wife’s teaching legacy THE POLAROID PRINT IS A BIT HAZY and faded by time, but the brightness of the woman’s smile and warmth of her eyes – as if fully savoring some lost moment long ago – still shine through the years. The photo was taken in the mid-1990s, when Margaret Tritle was an immensely popular developmental college English teacher just outside of Los Angeles. A cum laude 1966 graduate of USF’s College of Education, she specialized in helping first generation students learn to read and write, and her vibrant, upbeat personality and presence made her a natural at inspiring them to do their best – just as you can imagine from the picture.

It is a snapshot by her husband, Lawrence Tritle, then a professor of Greek and Roman history at Loyola Marymount University. To this day, the image has deep meaning to him – some 17 years after Margaret’s sudden passing left him, and the many others who loved her, reeling in heartbreak and disbelief. As it happens, the old photograph is also the face of a new, $500,000 gift to USF’s College of Education. The Margaret Burlington Tritle Endowed Scholarship supports standout education students at USF Tampa, and the Margaret Burlington Tritle Excellence in Teaching Faculty Award recognizes outstanding faculty members – a rare case of a donor giving to students and educators with the same gift. “I’ve wanted to do this for a long time, and it took these last 15 years to figure out how,” Tritle says. “I endowed a scholarship in summer study at Loyola Marymount soon after she died. But I wanted to do something that will allow students and faculty to be forever touched by Margaret at the school that was truly her home.” In fact, USF was even more. The university played a key role in Tritle leaving behind his service in Vietnam and beginning the journey in education and life he and Margaret enjoyed together – until that terrible day in August 2000. “The coroner’s report called it sudden cardiac death,” Tritle recalls. “She just collapsed beside me. You try to do CPR and then run to the house and call the paramedics, but at the hospital the doctor tells you, ‘We can keep trying but she’s not coming back. She’s gone.’ ” Tritle had fought in Vietnam as a first lieutenant in the Army infantry, earning such medals as the Bronze Star and Vietnam Cross of Gallantry while training South Vietnamese troops in the perilous Mekong Delta. But nothing would compare to losing the love of his life right before his eyes. THEY HAD MET BY CHANCE on Daytona Beach over Labor Day weekend in 1969. He was instantly smitten by the young woman who’d crossed his path just months before he would leave for combat. She had grown up in Tampa, becoming an honors student and class valedictorian at King High School. At USF, Margaret continued to excel, earning an array