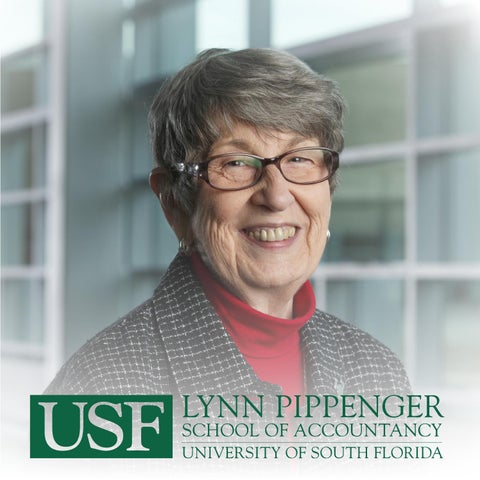 About the USF Lynn Pippenger School of Accountancy In honor of more than $22 million in gifts to support the university, which includes a $10 million gift to the USF Muma College of Business and its accounting programs, the University of South Florida School of Accountancy is now named for longtime supporter Lynn Pippenger. USF’s accountancy programs prepare students for private or public accounting, auditing, taxation, accounting information systems, and consulting. Our undergraduate and graduate programs in accountancy have both been ranked in the top 50, and accounting faculty are some of the leading researchers in fields such as auditing, tax, accounting and accounting information systems. The USF chapter of accounting honor society Beta Alpha Psi has been consistently recognized for excellence at a national level: it has earned the superior designation from its international organization for nearly 40 years and is one of only two schools to have received the KPMG Gold Award from Beta Alpha Psi for five years running. The USF Muma College of Business and the Lynn Pippenger School of Accountancy are separately accredited by AACSB International - the Association to Advance Collegiate Schools of Business. The hallmark of excellence in business education, AACSB’s Board of Directors reaffirmed USF’s accreditation in 2013, keeping the university on a list of just 178 institutions worldwide certified for quality in both overall business and accounting programs. “Our students will have an even better educational experience because of Lynn Pippenger,” said USF Muma College of Business Dean Moez Limayem.

USF Beta Alpha Psi students have made their chapter among the best worldwide.

Lynn Pippenger: Businesswoman and Philanthropist Lynn Pippenger likes to think of giving – and accounting – as part of her DNA. “When I was 4 or 5 years old and given a small allowance, I was taught that I always had to give back some of it to church and charities, I had to save some of it, and I could spend some of it,” she said. “I still do that same thing today.” A History of Giving Pippenger’s first gift to USF was in 1986, but that was only the beginning of her generosity. She continued giving to support scholarships for students studying abroad, to fund construction of a graduate student classroom, to establish the Lynn Pippenger Scholarship in Finance and Accounting, and to support USF Health. With her latest gift, she pledged more than $21 million in support of the Muma College of Business and its School of Accountancy - now named in her honor. Pippenger’s giving and service also extended to the Greater Largo Library Foundation, St. Petersburg Public Library, St. Petersburg General Hospital, Economic Club of Tampa Bay, and the Florida public school system, where she pioneeered a initiative to bring The Stock Market Game to Florida to introduce high school students to the world of stocks and investing. The game is still played in schools nationwide and is facilitated by economic education organizations across America. Corporate Trailblazer Pippenger’s career in accounting began long before she was a graduate of USF in 1988, and in an industry that, at the time, rarely included women in leadership positions. Descended from a long line of accountants and bookkeepers, she started working at Raymond James in 1969, hired as a payroll clerk in the then-unknown brokerage firm. That job quickly evolved, and she worked alongside Bob James, Tom James and several other men to help build the company. While she eventually served as chief financial officer and treasurer of

the firm, Pippenger handled numerous special projects as the company grew. She helped create the firm’s Human Resources Department, launched an internal educational program now known as “Raymond James University,” served as the architect behind much of the firm’s information technology systems, and helped filed the paperwork to take the company public. Today, the diversified financial services holding company and its three broker/dealer subsidiaries employ more than 6,200 financial advisors serving about 2.6 million accounts in 2,600 locations worldwide. Its total client assets are approximately $483 billion. The Future When Pippenger retired three years ago, she had long occupied a seat at Raymond James’ executive table, leaving the company as senior vice president. Now, she’s working to ensure that USF business students get the education that could further their own career growth. “I am honored to be associated with the USF Muma College of Business and its accounting program,” she said. “I am excited that, by giving now, I will have time to see the results of this gift. I look forward to seeing what the Lynn Pippenger School of Accountancy will accomplish.” This gift will help address the projected shortfall of qualified accountants in the workforce and prepare more accounting students for the field. It will help enhance the infrastructure and provide resources to help prepare students for critical certification exams, such as the one required for Certified Public Accountants, as well as to prepare students for the Certified Management Accountant, Certified Internal Auditor, and other credentials to make them more employable. “We are honored and humbled that Ms. Pippenger has chosen to invest so significantly in the accounting program at USF,” said Uday Murthy, director of the Lynn Pippenger School of Accountancy. “On behalf of our faculty, staff, and students, I commit to doing everything we can to make the Lynn Pippenger School of Accountancy at USF one of the best in the nation. We are proud to be entrusted with her vision for the future.” Lynn Pippenger School of Accountancy • Muma College of Business • University of South Florida 4202 E. Fowler Ave., BSN 3403 • Tampa, Florida 33620 • business.usf.edu