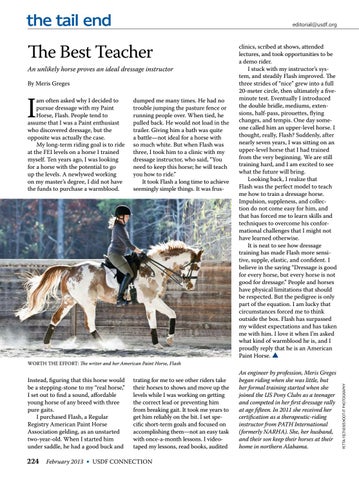 am often asked why i decided to pursue dressage with my Paint Horse, Flash. People tend to assume that i was a Paint enthusiast who discovered dressage, but the opposite was actually the case. My long-term riding goal is to ride at the Fei levels on a horse i trained myself. ten years ago, i was looking for a horse with the potential to go up the levels. A newlywed working on my master’s degree, i did not have the funds to purchase a warmblood.

dumped me many times. He had no trouble jumping the pasture fence or running people over. When tied, he pulled back. He would not load in the trailer. Giving him a bath was quite a battle—not ideal for a horse with so much white. But when Flash was three, i took him to a clinic with my dressage instructor, who said, “You need to keep this horse; he will teach you how to ride.” it took Flash a long time to achieve seemingly simple things. it was frus-

clinics, scribed at shows, attended lectures, and took opportunities to be a demo rider. i stuck with my instructor’s system, and steadily Flash improved. Te three strides of “nice” grew into a full 20-meter circle, then ultimately a fveminute test. eventually i introduced the double bridle, mediums, extensions, half-pass, pirouettes, fying changes, and tempis. one day someone called him an upper-level horse. i thought, really, Flash? Suddenly, after nearly seven years, i was sitting on an upper-level horse that i had trained from the very beginning. We are still training hard, and i am excited to see what the future will bring. Looking back, i realize that Flash was the perfect model to teach me how to train a dressage horse. impulsion, suppleness, and collection do not come easy for him, and that has forced me to learn skills and techniques to overcome his conformational challenges that i might not have learned otherwise. it is neat to see how dressage training has made Flash more sensitive, supple, elastic, and confdent. i believe in the saying “Dressage is good for every horse, but every horse is not good for dressage.” People and horses have physical limitations that should be respected. But the pedigree is only part of the equation. i am lucky that circumstances forced me to think outside the box. Flash has surpassed my wildest expectations and has taken me with him. i love it when i’m asked what kind of warmblood he is, and i proudly reply that he is an American Paint Horse. s

instead, fguring that this horse would be a stepping-stone to my “real horse,” i set out to fnd a sound, afordable young horse of any breed with three pure gaits. i purchased Flash, a Regular Registry American Paint Horse Association gelding, as an unstarted two-year-old. When i started him under saddle, he had a good buck and

trating for me to see other riders take their horses to shows and move up the levels while i was working on getting the correct lead or preventing him from breaking gait. it took me years to get him reliably on the bit. i set specifc short-term goals and focused on accomplishing them—not an easy task with once-a-month lessons. i videotaped my lessons, read books, audited

An engineer by profession, Meris Greges began riding when she was little, but her formal training started when she joined the US Pony Clubs as a teenager and competed in her frst dressage rally at age ffteen. In 2011 she received her certifcation as a therapeutic-riding instructor from PATH International (formerly NARHA). She, her husband, and their son keep their horses at their home in northern Alabama.

WORTH THE EFFORT: Te writer and her American Paint Horse, Flash