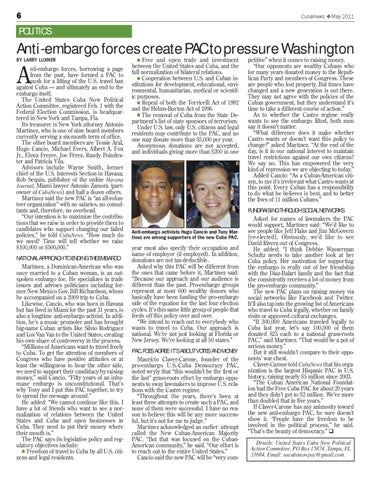 nti-embargo forces, borrowing a page from the past, have formed a PAC to push for a lifting of the U.S. travel ban against Cuba — and ultimately an end to the embargo itself. The United States Cuba Now Political Action Committee, registered Feb. 1 with the Federal Election Commission, is headquartered in New York and Tampa, Fla. Its treasurer is New York attorney Antonio Martínez, who is one of nine board members currently serving a six-month term of office. The other board members are Tessie Aral, Hugo Cancio, Michael Evers, Albert A. Fox Jr., Elena Freyre, Joe Pérez, Randy Poindexter and Patricia Vila. Advisors include Wayne Smith, former chief of the U.S. Interests Section in Havana; Rob Sequin, publisher of the online Havana Journal, Miami lawyer Antonio Zamora (partowner of CubaNews) and half a dozen others. Martínez said the new PAC is “an all-volunteer organization” with no salaries, no consultants and, therefore, no overhead. “Our intention is to maximize the contributions that we raise in order to provide them to candidates who support changing our failed policies,” he told CubaNews. “How much do we need? Time will tell whether we raise $100,000 or $500,000.” NATIONAL APPROACH TO ENDING THE EMBARGO

Martínez, a Dominican-American who was once married to a Cuban woman, is an outspoken embargo foe. He specializes in trade issues and advises politicians including former New Mexico Gov. Bill Richardson, whom he accompanied on a 2009 trip to Cuba. Likewise, Cancio, who was born in Havana but has lived in Miami for the past 31 years, is also a longtime anti-embargo activist. In addition, he’s a music promoter and has brought big-name Cuban artists like Silvio Rodríguez and Los Van Van to the United States, creating his own share of controversy in the process. “Millions of Americans want to travel freely to Cuba. To get the attention of members of Congress who have positive attitudes or at least the willingness to hear the other side, we need to support their candidacy by raising money,” said Cancio. “Fifty years of an inhumane embargo is unconstitutional. That’s why Tony and I put this PAC together, to try to spread the message around.” He added: “We cannot continue like this. I have a lot of friends who want to see a normalization of relations between the United States and Cuba and open businesses in Cuba. They need to put their money where their mouth is.” The PAC says its legislative policy and regulatory objectives include:  Freedom of travel to Cuba by all U.S. citizens and legal residents.

 Free and open trade and investment between the United States and Cuba, and the full normalization of bilateral relations.  Cooperation between U.S. and Cuban institutions for development, educational, environmental, humanitarian, medical or scientific purposes.  Repeal of both the Torricelli Act of 1992 and the Helms-Burton Act of 1996.  The removal of Cuba from the State Department’s list of state sponsors of terrorism. Under U.S. law, only U.S. citizens and legal residents may contribute to the PAC, and no one may donate more than $5,000 per year. Anonymous donations are not accepted, and individuals giving more than $200 in one

petitive” when it comes to raising money. “Our opponents are wealthy Cubans who for many years donated money to the Republican Party and members of Congress. These are people who lost property. But times have changed and a new generation is out there. They may not agree with the policies of the Cuban government, but they understand it’s time to take a different course of action.” As to whether the Castro regime really wants to see the embargo lifted, both men say it doesn’t matter. “What difference does it make whether Castro wants or doesn’t want this policy to change?” asked Martínez. “At the end of the day, is it in our national interest to maintain travel restrictions against our own citizens? We say no. This has empowered the very kind of repression we are objecting to today.” Added Cancio: “As a Cuban-American citizen, to me it’s irrelevant what Castro wants at this point. Every Cuban has a responsibility to do what he believes is best, and to better the lives of 11 million Cubans.” FUNDRAISING THROUGH SOCIAL NETWORKS

Anti-embargo activists Hugo Cancio and Tony Martínez are among supporters of the new Cuba PAC.

year must also specify their occupation and name of employer (if employed). In addition, donations are not tax-deductible. Asked why this PAC will be different from the ones that came before it, Martínez said: “Because our approach and our audience is different than the past. Pro-embargo groups represent at most 600 wealthy donors who basically have been funding the pro-embargo side of the equation for the last four election cycles. It’s this same little group of people that feeds off this policy over and over. “We intend to reach out to everybody who wants to travel to Cuba. Our approach is national. We’re not just looking at Florida or New Jersey. We’re looking at all 50 states.” PAC, FOES AGREE: IT’S ABOUT VOTES AND MONEY

Mauricio Claver-Carone, founder of the pro-embargo U.S.-Cuba Democracy PAC, noted wryly that “this wouldn’t be the first or the last” grass-roots effort by embargo opponents to sway lawmakers to improve U.S. relations with the Castro regime. “Throughout the years, there’s been at least three attempts to create such a PAC, and none of them were successful. I have no reason to believe this will be any more successful, but it’s not for me to judge.” Martínez acknowledged an earlier attempt called the New Cuban-American Majority PAC. “But that was focused on the CubanAmerican community,” he said. “Our effort is to reach out to the entire United States.” Cancio said the new PAC will be “very com-

Asked for names of lawmakers the PAC would support, Martínez said: “We’d like to see people like Jeff Flake and Jim McGovern [re-elected]. Obviously, we’d like to see David Rivera out of Congress. He added: “I think Debbie Wasserman Schultz needs to take another look at her Cuba policy. Her motivation for supporting the embargo is really out of her friendship with the Díaz-Balart family and the fact that she consistently receives a lot of money from the pro-embargo community.” The new PAC plans on raising money via social networks like Facebook and Twitter. It’ll also tap into the growing list of Americans who travel to Cuba legally, whether on family visits or approved cultural exchanges. “If 300,000 Americans traveled legally to Cuba last year, let’s say 100,000 of them donated $25 each to a national grass-roots PAC,” said Martínez. “That would be a pot of serious money.” But it still wouldn’t compare to their opponents’ war chest. Claver-Carone told CubaNews that his organization is the largest Hispanic PAC in U.S. history, raising nearly $5 million since 2003. “The Cuban American National Foundation had the Free Cuba PAC for about 20 years and they didn’t get to $2 million. We’ve more than doubled that in five years.” If Claver-Carone has any animosity toward the new anti-embargo PAC, he sure doesn’t show it. “People have the freedom to be involved in the political process,” he said. “That’s the beauty of democracy.”  Details: United States Cuba Now Political Action Committee, PO Box 15874, Tampa, FL 33684. Email: uscubanowpac@gmail.com. Anti-embargo forces, borrowing a page from the past, have formed a PAC to push for a lifting of the U.S. travel ban against Cuba — and ultim...

Anti-embargo forces, borrowing a page from the past, have formed a PAC to push for a lifting of the U.S. travel ban against Cuba — and ultim...