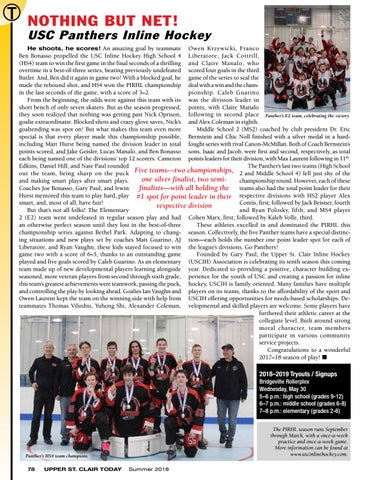 USC Panthers Inline Hockey He shoots, he scores! An amazing goal by teammate Owen Krzywicki, Franco Ben Bonasso propelled the USC Inline Hockey High School 4 Liberatore, Jack Cottrill, (HS4) team to win the first game in the final seconds of a thrilling and Claire Manalo, who overtime in a best-of-three series, beating previously undefeated scored four goals in the third Butler. And, Ben did it again in game two! With a blocked goal, he game of the series to seal the made the rebound shot, and HS4 won the PIRHL championship deal with a win and the chamin the last seconds of the game, with a score of 3–2. pionship. Caleb Guarino From the beginning, the odds were against this team with its was the division leader in short bench of only seven skaters. But as the season progressed, points, with Claire Manalo they soon realized that nothing was getting past Nick Oprison, following in second place Panther’s E2 team, celebrating the victory goalie extraordinaire. Blocked shots and crazy glove saves, Nick’s and Alex Coleman in eighth. goaltending was spot on! But what makes this team even more Middle School 2 (MS2) coached by club president Dr. Eric special is that every player made this championship possible, Bernstein and Chic Noll finished with a silver medal in a hardincluding Matt Hurst being named the division leader in total fought series with rival Canon-McMillan. Both of Coach Bernstein’s points scored, and Jake Geisler, Lucas Manalo, and Ben Bonasso sons, Isaac and Jacob, were first and second, respectively, as total each being named one of the divisions’ top 12 scorers. Cameron points leaders for their division, with Max Laurent following in 11th. Edkins, Daniel Hilf, and Nate Paul rounded The Panther’s last two teams (High School out the team, being sharp on the puck Five teams—two championships, 2 and Middle School 4) fell just shy of the one silver finalist, two semiand making smart plays after smart plays. championship round. However, each of these Coaches Joe Bonasso, Gary Paul, and Irwin finalists—with all holding the teams also had the total point leader for their Hurst mentored this team to play hard, play #1 spot for point leader in their respective divisions with HS2 player Alex smart, and, most of all, have fun! Contis, first; followed by Jack Beisner, fourth respective division But that’s not all folks! The Elementary and Ryan Polosky, fifth; and MS4 player 2 (E2) team went undefeated in regular season play and had Cohen Marx, first; followed by Kaleb Volle, third. an otherwise perfect season until they lost in the best-of-three These athletes excelled in and dominated the PIRHL this championship series against Bethel Park. Adapting to chang- season. Collectively, the five Panther teams have a special distincing situations and new plays set by coaches Matt Guarino, AJ tion—each holds the number one point leader spot for each of Liberatore, and Ryan Vaughn, these kids stayed focused to win the league’s divisions. Go Panthers! game two with a score of 6–5, thanks to an outstanding game Founded by Gary Paul, the Upper St. Clair Inline Hockey played and five goals scored by Caleb Guarino. As an elementary (USCIH) Association is celebrating its tenth season this coming team made up of new developmental players learning alongside year. Dedicated to providing a positive, character building exseasoned, more veteran players from second through sixth grade, perience for the youth of USC and creating a passion for inline this team’s greatest achievements were teamwork, passing the puck, hockey, USCIH is family oriented. Many families have multiple and controlling the play by looking ahead. Goalies Ian Vaughn and players on its teams, thanks to the affordability of the sport and Owen Laurent kept the team on the winning side with help from USCIH offering opportunities for needs-based scholarships. Deteammates Thomas Vilushis, Yuhong Shi, Alexander Coleman, velopmental and skilled players are welcome. Some players have furthered their athletic career at the collegiate level. Built around strong moral character, team members participate in various community service projects. Congratulations to a wonderful 2017–18 season of play! n 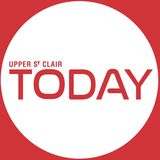