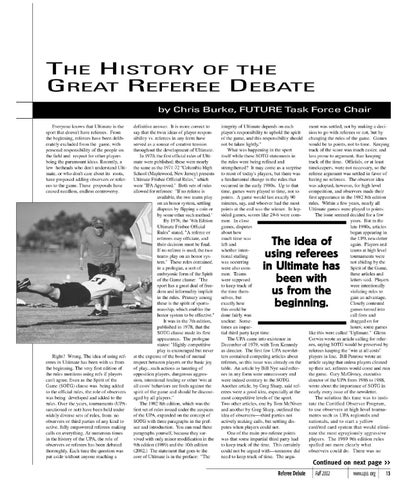 THE HISTORY OF THE GREAT REFEREE 0 EBATE by Chris Burke, FUTURE Task Force Chair Everyone knows that Ultimate is the sport that doesn&#39;t have referees. From the beginning, referees have been deliberately excluded from the game, with personal responsibility of the people on the field and respect for other players being the paramount ideas. Recently, a few hotheads who don&#39;t understand Ultimate, or who don&#39;t care about its roots, have proposed adding observers or referees to the game. These proposals have caused needless, endless controversy.

Right? Wrong. The idea of using referees in Ultimate has been with us from the beginning. The very first edition of the rules mentions using refs if players can&#39;t agree. Even as the Spirit of the Game (SOTG) clause was being added to the official rules, the role of observers was being developed and added to the rules. Over the years, tournaments (UPAsanctioned or not) have been held under widely diverse sets of rules, from no observers or third parties of any kind to active, fully empowered referees making calls on everything. At numerous times in the history of the UPA, the role of observers or referees has been debated thoroughly. Each time the question was put aside without anyone reaching a

definitive answer. It is more correct to say that the twin ideas of player responsibility vs. referees in any form have served as a source of creative tension throughout the development of Ultimate. fu 1970, the first official rules of Ultimate were published; these were nearly the same as the 1971-72 &quot;Columbia High School (Maplewood, New Jersey) presents Ultimate Frisbee Official Rules,&quot; which were &quot;IFA Approved.&quot; Both sets of rules allowed for referees: &quot;If no referee is available, the two teams play on an honor system, settling disputes by flipping a coin or by some other such method.&quot; By 1976, the &quot;6th Edition Ultimate Frisbee Official Rules&quot; stated, &quot;A referee or referees may officiate, and their decision must be final. If no referee is used, the two teams play on an honor system.&quot; These rules contained, in a prologue, a sort of embryonic form of the Spirit of the Game clause: &quot;The sport has a great deal of freedom and informality implicit in the rules. Primary among these is the spirit of sportsmanship, which enables the honor system to be effective.&quot; It was in the 7th edition, published in 1978, that the SOTG clause made its first appearance. The prologue states: &quot;Highly competitive play is encouraged but never at the expense of the bond of mutual respect between players or the basic joy of play... such actions as taunting of opposition players, dangerous aggression, intentional fouling or other &#39;win at all costs&#39; behaviors are fouls against the spirit of the game and should be discouraged by all players.&quot; The 1982 8th edition, which was the first set of rules issued under the auspices of the UPA, expanded on the concept of SOTG with three paragraphs in the preface and introduction. You can read these paragraphs yourself, because they survived with only minor modification in the 9th edition (1989) and the lOth edition (2002.) The statement that goes to the core of Ultimate is in the preface: &quot;The

integrity of Ultimate depends on each player&#39;s responsibility to uphold the spirit of the game, and this responsibility should not be taken lightly.&quot; What was happening in the sport itself while these SOTG statements in the rules were being refined and strengthened? It may come as a surprise to most of today&#39;s players, but there was a fundamental change in the rules that occurred in the early 1980s. Up to that time, games were played to time, not to points. A game would last exactly 90 minutes, say, and whoever had the most points at the end was the winner. In lopsided games, scores like 29-6 were common. In close games, disputes about how much time was left and whether intentional stalling was occurring were also common. Teams were supposed to keep track of the time themselves, but exactly how this could be done fair! y was unclear. Sometimes an impartial third party kept time. The UPA came into existence in December of 1979, with Tom Kennedy as director. The first few UPA newsletters contained competing articles about referees, so this issue was already on the table. An article by Bill Nye said referees in any form were unnecessary and were indeed contrary to the SOTG. Another article, by Greg Sharp, said referees were a good idea, especially at the most competitive levels of the sport. Two other articles, one by Tom McNiven and another by Greg Sharp, outlined the idea of observers--third parties not actively making calls, but settling disputes when players could not. One of the main pro-referee points was that some impartial third party had to keep track of the time. This certainly could not be argued with-someone did need to keep track of time. The argu-

ment was settled, not by making a decision to go with referees or not, but by changing the rules of the game. Games would be to points, not to time. Keeping track of the score was much easier, and less prone to argument, than keeping track of the time. Officials, or at least timekeepers, were not necessary, so the referee argument was settled in favor of having no referees. The observer idea was adopted, however, for high level competition, and observers made their first appearance in the 1982 8th edition rules. Within a few years, nearly all Ultimate games were played to points. The issue seemed decided for a few years. But in the late 1980s, articles began appearing in the UPA newsletter again. Players and teams at high level tournaments were not abiding by the Spirit of the Game, these articles and letters said. Players were intentionally violating rules to gain an advantage. Closely contested games turned into call fests and dragged on for hours; some games like this were called &quot;Uglimate.&quot; Glenn Corwin wrote an article calling for referees, saying SOTG would be preserved by referees keeping the &quot;win at all costs&quot; players in line. Bill Penrose wrote an article saying that unless players cleaned up their act, referees would come and ruin the game. Gary McGivney, executive director of the UPA from 1986 to 1988, wrote about the importance of SOTG in nearly every issue of the newsletter. The solution this time was to institute the Certified Observer Program, to use observers at high level tournaments such as UPA regionals and nationals, and to start a yellow card/red card system that would eliminate the most egregiously aggressive players. The 1989 9th edition rules spelled out more clearly what observers could do. There was no

The idea of using referees in Ultimate has been with us from the beginning.

Continued on next page Referee Debate 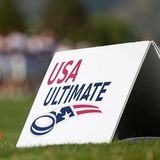