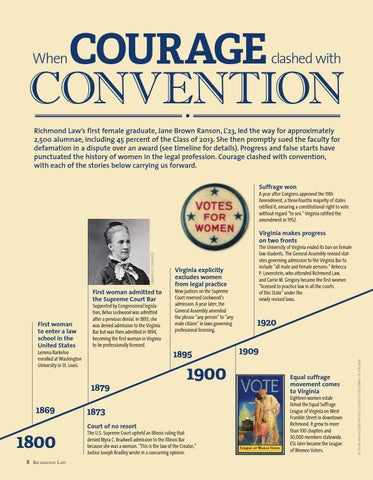 convention Richmond Law’s first female graduate, Jane Brown Ranson, L’23, led the way for approximately 2,500 alumnae, including 45 percent of the Class of 2013. She then promptly sued the faculty for defamation in a dispute over an award (see timeline for details). Progress and false starts have punctuated the history of women in the legal profession. Courage clashed with convention, with each of the stories below carrying us forward. Suffrage won A year after Congress approved the 19th Amendment, a three-fourths majority of states ratified it, ensuring a constitutional right to vote without regard “to sex.” Virginia ratified the amendment in 1952.

First woman to enter a law school in the United States

Supported by Congressional legislation, Belva Lockwood was admitted after a previous denial. In 1893, she was denied admission to the Virginia Bar but was then admitted in 1894, becoming the first woman in Virginia to be professionally licensed.

The University of Virginia ended its ban on female law students. The General Assembly revised statutes governing admission to the Virginia Bar to include “all male and female persons.” Rebecca P. Lovenstein, who attended Richmond Law, and Carrie M. Gregory became the first women “licensed to practice law in all the courts of this State” under the newly revised laws.

1873 Court of no resort The U.S. Supreme Court upheld an Illinois ruling that denied Myra C. Bradwell admission to the Illinois Bar because she was a woman. “This is the law of the Creator,” Justice Joseph Bradley wrote in a concurring opinion.

Button and poster photos: courtesy of Library of virginia

Vol. 26, No. 1 University of Richmond School of Law Alumni Magazine