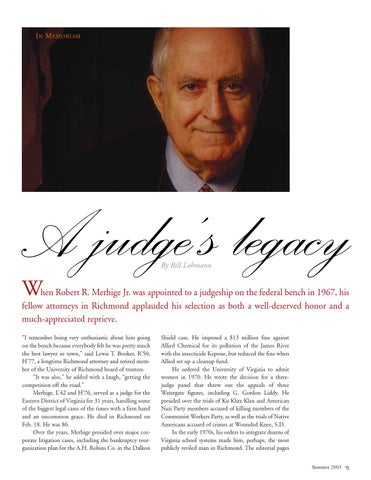 A judge’s legacy By Bill Lohmann

When Robert R. Merhige Jr. was appointed to a judgeship on the federal bench in 1967, his fellow attorneys in Richmond applauded his selection as both a well-deserved honor and a much-appreciated reprieve. “I remember being very enthusiastic about him going on the bench because everybody felt he was pretty much the best lawyer in town,” said Lewis T. Booker, R’50, H’77, a longtime Richmond attorney and retired member of the University of Richmond board of trustees. “It was also,” he added with a laugh, “getting the competition off the road.” Merhige, L’42 and H’76, served as a judge for the Eastern District of Virginia for 31 years, handling some of the biggest legal cases of the times with a firm hand and an uncommon grace. He died in Richmond on Feb. 18. He was 86. Over the years, Merhige presided over major corporate litigation cases, including the bankruptcy reorganization plan for the A.H. Robins Co. in the Dalkon

Shield case. He imposed a $13 million fine against Allied Chemical for its pollution of the James River with the insecticide Kepone, but reduced the fine when Allied set up a cleanup fund. He ordered the University of Virginia to admit women in 1970. He wrote the decision for a threejudge panel that threw out the appeals of three Watergate figures, including G. Gordon Liddy. He presided over the trials of Ku Klux Klan and American Nazi Party members accused of killing members of the Communist Workers Party, as well as the trials of Native Americans accused of crimes at Wounded Knee, S.D. In the early 1970s, his orders to integrate dozens of Virginia school systems made him, perhaps, the most publicly reviled man in Richmond. The editorial pages Summer 2005 15

Vol. 18, No. 1 University of Richmond School of Law Alumni Magazine