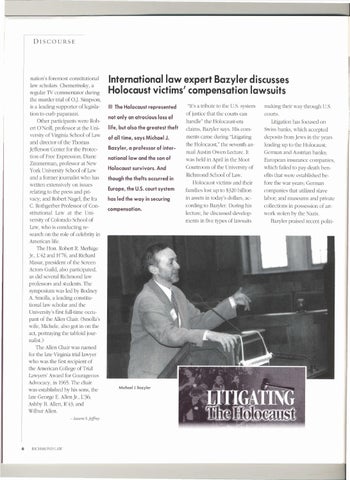 nation&#39;s foremost constitutional law scholars. Chemerinsky, a regular TV commentator during the murder trial of O.]. Simpson, is a leading suppo1ter of legislation to curb paparazzi. Other pa1ticipants were Robe1t O&#39;Neill , professor at the University of Virginia School of Law and director of the Thomas Jefferson Center for the Protection of Free Expression; Diane Zimmerman, professor at New York University School of Law and a former journalist who has written extensively on issues relating to the press and privacy; and Robert Nagel, the Ira C. Rothgerber Professor of Constitutio nal Law at the University of Colorado Schoo l of Law, who is conducting resea rch on the role of celebrity in American life. The Hon. Robert R. Merhige Jr., L&#39;42 and H&#39;76, and Richard Masur, president of the Screen Actors Guild, also participated, as did several Richmond law professors and students. The symposium was led by Rodney A. Smolla, a lead ing constitutional law scholar and the University&#39;s first full-time occupant of the Allen Chair. (Smolla&#39;s wife, Michele, also got in on the act, portraying the tabloid journalist.) The Allen Chair was named for the late Virginia trial lawyer who was the first recipient of the American College of Trial Lawyers&#39; Award fo r Courageous Advocacy, in 1965. The chair was established by his sons, the late George E. Allen Jr., L&#39;36; Ashby B. Allen, R&#39;43; and Wilbur Allen. - Lau ra S.jef./rey

not only an atrocious loss of life, but also the greatest theft of all time, says Michael J. Bazyler, a professor of international law and the son of Holocaust survivors. And though the thefts occurred in Europe, the U.S. court system has led the way in securing compensation.

&quot;Ir&#39;s a tri bute to the U.S. system of justice that the courts can handle&quot; the Holocaust-era claims, Bazyler says. His comments ca me during &quot;Litigating the Holocaust,&quot; the seventh annual Austin Owen Lecture. It was held in April in the Moot Courtroom of the University of Richmond School of Law. Holocaust victims and their fa milies lost up to $320 billion in assets in today&#39;s dollars, according to Bazyler. During his lecture, he discussed developments in five types of lawsuits

making their way through U.S. courts. Litigation has focused on Swiss banks, which accepted deposits from Jews in the years leading up to the Holocaust; German and Austrian banks; Europea n insurance companies, which failed to pay death benefits that were established before the war years; German companies that utilized slave labo r; and museums and private collections in possession of a1twork stolen by the Nazis. Bazyler praised recent politi-

Vol. 12, No. 2 University of Richmond School of Law Alumni Magazine