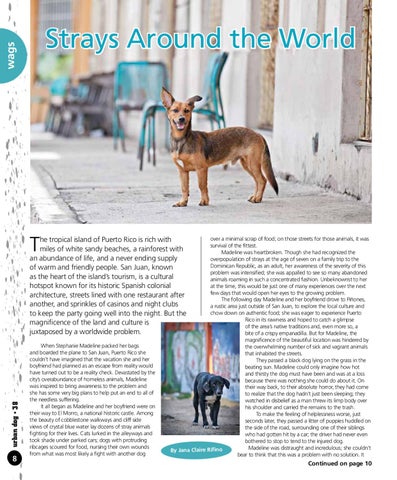 Strays Around the World

he tropical island of Puerto Rico is rich with miles of white sandy beaches, a rainforest with an abundance of life, and a never ending supply of warm and friendly people. San Juan, known as the heart of the island’s tourism, is a cultural hotspot known for its historic Spanish colonial architecture, streets lined with one restaurant after another, and sprinkles of casinos and night clubs to keep the party going well into the night. But the magnificence of the land and culture is juxtaposed by a worldwide problem.

When Stephanie Madeline packed her bags and boarded the plane to San Juan, Puerto Rico she couldn’t have imagined that the vacation she and her boyfriend had planned as an escape from reality would have turned out to be a reality check. Devastated by the city’s overabundance of homeless animals, Madeline was inspired to bring awareness to the problem and she has some very big plans to help put an end to all of the needless suffering. It all began as Madeline and her boyfriend were on their way to El Morro, a national historic castle. Among the beauty of cobblestone walkways and cliff side views of crystal blue water lay dozens of stray animals fighting for their lives. Cats lurked in the alleyways and took shade under parked cars; dogs with protruding ribcages scoured for food, nursing their own wounds from what was most likely a fight with another dog

over a minimal scrap of food; on those streets for those animals, it was survival of the fittest. Madeline was heartbroken. Though she had recognized the overpopulation of strays at the age of seven on a family trip to the Dominican Republic, as an adult, her awareness of the severity of this problem was intensified; she was appalled to see so many abandoned animals roaming in such a concentrated fashion. Unbeknownst to her at the time, this would be just one of many experiences over the next few days that would open her eyes to the growing problem. The following day Madeline and her boyfriend drove to Piñones, a rustic area just outside of San Juan, to explore the local culture and chow down on authentic food; she was eager to experience Puerto Rico in its rawness and hoped to catch a glimpse of the area’s native traditions and, even more so, a bite of a crispy empanadilla. But for Madeline, the magnificence of the beautiful location was hindered by the overwhelming number of sick and vagrant animals that inhabited the streets. They passed a black dog lying on the grass in the beating sun. Madeline could only imagine how hot and thirsty the dog must have been and was at a loss because there was nothing she could do about it. On their way back, to their absolute horror, they had come to realize that the dog hadn’t just been sleeping; they watched in disbelief as a man threw its limp body over his shoulder and carried the remains to the trash. To make the feeling of helplessness worse, just seconds later, they passed a litter of puppies huddled on the side of the road, surrounding one of their siblings who had gotten hit by a car; the driver had never even bothered to stop to tend to the injured dog. Madeline was distraught and incredulous; she couldn’t By Jana Claire Rifino bear to think that this was a problem with no solution. It

Urban Dog is a glossy full-color national quarterly magazine that celebrates the magic of the canine spirit. Get in touch with your Inner Dog!