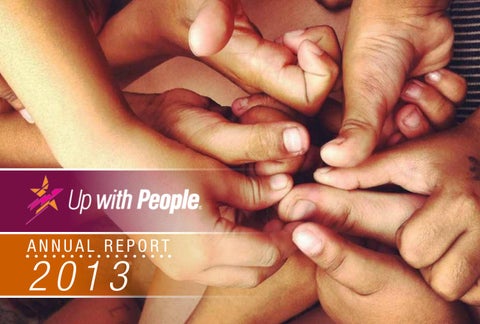 letter from the ceo Dear alumni and friends of Up with People, Almost 50 years ago Up with People became a song, a conviction, and the name of an organization that would become a worldwide force, bringing people together for common good despite ideological, political, ethnic and religious differences. As we end our fourth year in a row of balanced budgets and strong financial position, we find our world still facing the same challenges as before. This tells us that our message remains relevant, our impact is powerful, and our music continues to touch the lives of many around the globe. It is thanks to you, our alumni and friends, who have been steadfast in your support as we continue to strengthen our operations and remain convicted to our mission. 2013 ended on a positive note for several reasons. From strong cast operations and tours to continued increases in enrollment, and a management team in place that recognized the need to be frugal with expenditures, you have much to be proud of in the investment you made this year and years past. We are positioned well to provide a unique experience for our students and to continue to have the impact in communities around the globe that we seek. As we look forward to what is ahead of us with your 50th Anniversary celebration in 2015, we are confident that with your continued support and vision of what Up with People means today, we can indeed continue to build a foundation for world peace. On behalf of a committed board of directors, staff and grateful students, I thank you for your support and look forward to celebrating our future together. Sincerely,

program components Up with People exists today to spark people into action in meeting the needs of their communities, countries, and the world while building bridges of understanding as a foundation for world peace.

International Participants We value diversity of thought, experience, and culture among our participants who come from all regions and countries of the world, providing a multi-cultural experience for all involved. We broaden understanding as a foundation for peace by traveling with other participants from around the world. We nurture and develop global citizenship in all of our participants.

World Travel We travel to where we can make a positive difference in the world. We devote our time while touring to work with communities in emerging countries. We increase mutual cultural understanding by staying with local host families wherever we travel.

Global Education We encourage students to exceed their perceived personal limitations. We provide a firsthand experience of the role and responsibility of a world ambassador. We develop the capacity for global leadership while emphasizing community impact. We utilize our academic partnership with Florida Southern College to help our students advance their education while traveling around the world.

Community Partners We engage in meaningful service that has a lasting impact within the communities we visit. We actively promote awareness of our partner organizations to others in the community. We inspire all community members to work together and bring to life the idea of making a positive difference.

Musical Performance We use the universal language of music as a way to inspire, energize, educate, and communicate. We use music to celebrate our mission and integrate the stories of our community partners. We give back proceeds generated by sponsored shows to nonprofits in the local community.

We are grateful to the numerous foundations, corporations, and businesses who believe in our work and support our mission. Whether they sponsor an Up with People visit to their city or donate meals to our cast during the tour, the financial and in-kind support received from the organizations below are deeply appreciated. Kanto Nalbank Kiwanis Club of Statesboro GA Inc Lions Club Tielt McDonald Family Legacy Trust McDonald’s Corporation New Hampshire Academy of Performing Arts, Inc. The News Press Renda Broadcasting Dan &amp; Jeanne Scott Family Foundation Statesboro Arts Council Inc. Statesboro High School Fine Arts Department Waterman Broadcasting

HONOR ROLL OF DONORS The staff and board of directors of Up with People would like to extend our heartfelt thanks to our individual, corporate, foundation, alumni, and in-kind donors who provide tremendous support to our organization. Our program would not be a success without their generous contributions and their belief in Up with People. DIAMOND STAR PARTNERS ($50,000+) Charles and Stephanie Jarrett

honorariums &amp; memorials Individuals and businesses have made gifts in honor or in memory of the following individuals and groups:

The following gifts have been made in honor or in memory of alumni and supporters of Up with People:

Gifts have been made in honor of:

In memory of Shauna (Malone) Kemp (‘92B) from Michael H. Key Donna Vercelli In memory of Samuel Lanham (‘70A) from Paul Kiesel In memory of Randy Bellamy (‘78E) from Retta (Bellamy) Overturf (‘76A) and Brad Overturf In memory of Jeffrey Wynveen from Robert F. Seaton In memory of Bruce Harris (‘75C) from Robin E. (Beard) Tashijan (‘78C) In memory of Dr. Morris Martin (‘69C) from Christian Walton (‘69C)

Our two sons returned from Up with People as completely different people. They were Paul and Robin The 19 cities which traveled to with definitely dif- Bedford open-minded, in Ilove with di- Up with People arehost family ferent from other city I have visited. In each city, there is a family versity, andanycared about social United States with whom I have shared my life andthe a community which I have imissues occurring throughout pacted with our service and performance. These connections have made world, not just in Mexico. We places I truly carerealabout each and every person. look atinto ourfaces twoandsons and ize that they are better prepared for whatever comes next in life. They returned as better versions of themselves. Juan Carlos Gonzalez and Maria de Lourdes Perez parents of Up with People students Mexico

The 19 cities which I traveled to with Up with People are definitely different from any other city I have visited. In each city, there is a family with whom I have shared my life and a community which I have impacted with our service and performance. These connections have made places into faces and I truly care about each and every person.

Up with People provided an opportunity to expand our children’s knowledge and acceptance of other cultures and people.

Thanks to Up with People, I know that I can do so much more than what I thought I could, physically and mentally. I learned that I can always push a little more. There is no limit when it comes to becoming a better person – for yourself and for others. Up with People
Go explore