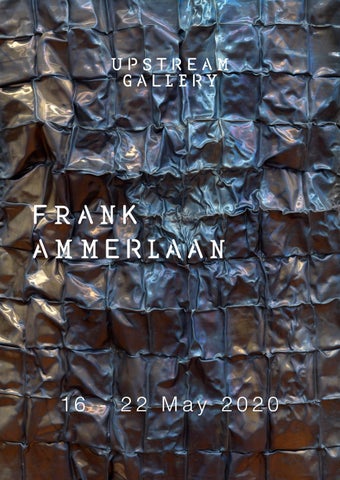 FR ANK AM MERL A AN

During the COVID-19 pandemic, Upstream Gallery presents Upstream Focus, a series of single work exhibitions in our private viewing space. Every week we will highlight the work of one artist, both online as well as offline. The work is to be visited solely by appointment. Book your own timeslot, free of charge, via info@upstreamgallery.nl. The second Upstream Focus are two of Frank Ammerlaanâ&amp;#x20AC;&amp;#x2122;s metal works; Untitled (2020), electroplated copper and Untitled (2020), lead. In this document we will delve deeper into both the works as well as the artist.

Since the exhibition Particles of Dust at Upstream Gallery in Amsterdam in 2017 Ammerlaan shifted his attention to the physical matter. It is the world’s matter that is his medium, excavated from the ground, moving in circles around us and falling from the sky. In order to get a grip on our surroundings he tries to understand what this space is made out of and how to scrutinise it. “Material no longer needs to be understood as a detachable carrier for a form or an idea, but can be regarded as indissolubly interwoven with it”.1 The raw matter is an autonomous element, an intermediary material, and part of a transmuting process, “stretching itself between things and thoughts”.2 Materiality is subject to form and idea whilst also constituting the building blocks of the universe and being the source of potent metaphors. Fossil fuels, cosmic particles dating back to the oldest times of our solar system, an array of metals and elements, raw particles and pigments, dust and dirt are just a selection of media used in my practice.” In the artist’s practice one can find a particle order as well as a chromatic order. Matter has an objective history, yet it also has a subjective and cultural context when one experiences its hue. Though colour is never unimportant, as Donald Judd stated, no colour exists without being accompanied by material. Ammerlaan applies heavy industrial zinc treatments onto metal to protect it from decay and to prolong its life by transforming one material into another. This ‘modern day alchemy’ is an act of rejuvenation generating an uncontrollable array of colour. The artist does not see matter as a passive agent but rather as a dynamic and evolutionary one which transforms, mutates and deteriorates. The pattern matter creates is deeply woven into the fabric of our lives in the cosmos and produces an overwhelming sense of geometry which in turn is shaped by the weight of all existing matter forged and arranged in an orderly system.

For a new series of â&amp;#x20AC;&amp;#x2DC;Leadworksâ&amp;#x20AC;&amp;#x2122;, Ammerlaan has systematically folded and deformed the dense but malleable metal. Lead is contaminated with meaning, it is alchemical and poisonous but also used as radioactive armour. Forged during the explosion of a star, the chemical element Uranium over time decays into the stable element Lead able to protect the human body being overexposed by the radiation of its former self.

Frank Ammerlaan In his recent work, Frank Ammerlaan (born in 1979 in the Netherlands) makes use of unconventional materials ranging from dirt and dust, (liquid) metals and meteorite particles. Subsequently, you find complex machine embroidery and ‘patchworks’ of diverse canvasses and fabrics that have been exposed to the elements outdoors. Tiny particles of dust have gathered on the canvas: the resulting stains are rudimentary, indexical recordings of the natural cycles of the environment. With pulverized metals and meteorites the artist creates powder-like and complex geometric patterns. The cosmic material dates from the early times of our solar system: it is by far the oldest material to be found on earth. Scientists consider it as the vital source of the organic compounds that gave rise to life on earth.

patina. Ammerlaan can be seen as a contemporary alchemist, researching perception, the boundaries of painting and unpredictable processes.

Frank Ammerlaan (1979) is based in Berlin. He studied at the Gerrit Rietveld Academie en got his MA at the Royal College of Art in London. Prizes he won include the Scheffer Prize (2013), the Royal Prize of Painting, the Land Securities Prize RCA, the Doha Studio Art Prize (all 2012) and the Gerrit Rietveld Academy Painting Prize (2007). He had solo exhibitions at the Dordrechts Museum, Museo d’Arte Conteporanea Calasetta and at different international galleries. His work has been included in a number of group exhibitions in and outside of the Netherlands, at places such as White Cube Gallery, KUMU Art Museum in Tallinn, the Royal His recent metal works also are an Palace in Amsterdam and NEST in The investigation of untested material and Hague. Ammerlaan is one of the founders technique. Ammerlaan created them of artist-run initiative De Service Garage. through a type of electrolysis, a chemical His work is part of leading private and process normally used to protect screws corporate art collections and museums and other small metal particles from rust. such as Gemeentemuseum Den Haag As a side effect, this treatment delivers and Museum Voorlinden. an unpredictable and multicolored