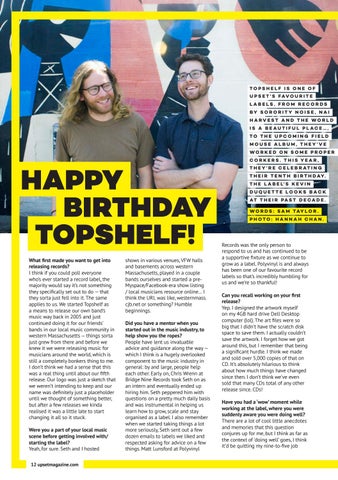 HAPPY BIRTHDAY TOPSHELF! What first made you want to get into releasing records? I think if you could poll everyone who’s ever started a record label, the majority would say it’s not something they specifically set out to do — that they sorta just fell into it. The same applies to us. We started Topshelf as a means to release our own band’s music way back in 2005 and just continued doing it for our friends’ bands in our local music community in western Massachusetts — things sorta just grew from there and before we knew it we were releasing music for musicians around the world, which is still a completely bonkers thing to me. I don’t think we had a sense that this was a real thing until about our fifth release. Our logo was just a sketch that we weren’t intending to keep and our name was definitely just a placeholder until we thought of something better, but after a few releases we kinda realised it was a little late to start changing it all so it stuck. Were you a part of your local music scene before getting involved with/ starting the label? Yeah, for sure. Seth and I hosted 12 upsetmagazine.com

shows in various venues, VFW halls and basements across western Massachusetts, played in a couple bands ourselves and started a preMyspace/Facebook-era show listing / local musicians resource online… I think the URL was like, westernmass. cjb.net or something? Humble beginnings. Did you have a mentor when you started out in the music industry, to help show you the ropes? People have lent us invaluable advice and guidance along the way — which I think is a hugely overlooked component to the music industry in general: by and large, people help each other. Early on, Chris Wrenn at Bridge Nine Records took Seth on as an intern and eventually ended up hiring him. Seth peppered him with questions on a pretty much daily basis and was instrumental in helping us learn how to grow, scale and stay organised as a label. I also remember when we started taking things a lot more seriously, Seth sent out a few dozen emails to labels we liked and respected asking for advice on a few things. Matt Lunsford at Polyvinyl

Records was the only person to respond to us and has continued to be a supportive fixture as we continue to grow as a label. Polyvinyl is and always has been one of our favourite record labels so that’s incredibly humbling for us and we’re so thankful! Can you recall working on your first release? Yep. I designed the artwork myself on my 4GB hard drive Dell Desktop computer (lol). The art files were so big that I didn’t have the scratch disk space to save them. I actually couldn’t save the artwork. I forget how we got around this, but I remember that being a significant hurdle. I think we made and sold over 5,000 copies of that on CD. It’s absolutely hilarious to think about how much things have changed since then. I don’t think we’ve even sold that many CDs total of any other release since. CDs! Have you had a ‘wow’ moment while working at the label, where you were suddenly aware you were doing well? There are a lot of cool little anecdotes and memories that this question conjures up for me, but I think as far as the context of ’doing well’ goes, I think it’d be quitting my nine-to-five job 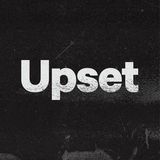