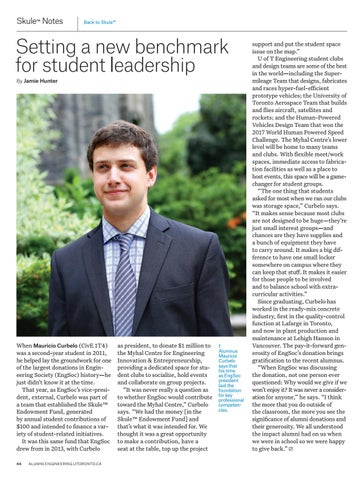 Setting a new benchmark for student leadership By Jamie Hunter

When Mauricio Curbelo (CivE 1T4) was a second-year student in 2011, he helped lay the groundwork for one of the largest donations in Engineering Society (EngSoc) history—he just didn’t know it at the time. That year, as EngSoc’s vice-president, external, Curbelo was part of a team that established the Skule™ Endowment Fund, generated by annual student contributions of $100 and intended to finance a variety of student-related initiatives. It was this same fund that EngSoc drew from in 2013, with Curbelo 44  ALUMNI.ENGINEERING.UTORONTO.CA

as president, to donate $1 million to the Myhal Centre for Engineering Innovation & Entrepreneurship, providing a dedicated space for student clubs to socialize, hold events and collaborate on group projects. “It was never really a question as to whether EngSoc would contribute toward the Myhal Centre,” Curbelo says. “We had the money [in the Skule™ Endowment Fund] and that’s what it was intended for. We thought it was a great opportunity to make a contribution, have a seat at the table, top up the project

support and put the student space issue on the map.” U of T Engineering student clubs and design teams are some of the best in the world—including the Supermileage Team that designs, fabricates and races hyper-fuel-­efficient prototype vehicles; the University of Toronto Aerospace Team that builds and flies aircraft, satellites and rockets; and the Human-Powered Vehicles Design Team that won the 2017 World Human Powered Speed Challenge. The Myhal Centre’s lower level will be home to many teams and clubs. With flexible meet/work spaces, immediate access to fabrication facilities as well as a place to host events, this space will be a game-­ changer for student groups. “The one thing that students asked for most when we ran our clubs was storage space,” Curbelo says. “It makes sense because most clubs are not designed to be huge—they’re just small interest groups—and chances are they have supplies and a bunch of equipment they have to carry around. It makes a big difference to have one small locker somewhere on campus where they can keep that stuff. It makes it easier for those people to be involved and to balance school with extra-­ curricular activities.” Since graduating, Curbelo has worked in the ready-mix concrete industry, first in the quality-control function at Lafarge in Toronto, and now in plant production and maintenance at Lehigh Hanson in Vancouver. The pay-it-forward generosity of EngSoc’s donation brings gratification to the recent alumnus. “When EngSoc was discussing the donation, not one person ever questioned: Why would we give if we won’t enjoy it? It was never a consideration for anyone,” he says. “I think the more that you do outside of the classroom, the more you see the significance of alumni donations and their generosity. We all understood the impact alumni had on us when we were in school so we were happy to give back.” 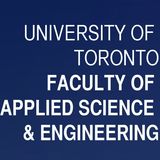