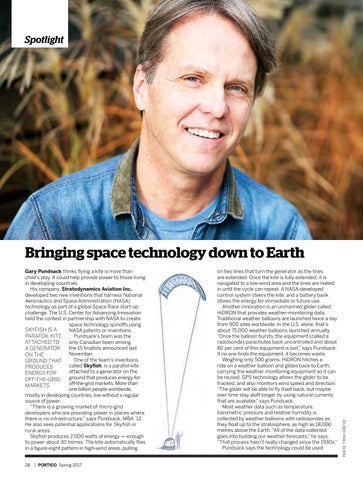 Gary Pundsack thinks flying a kite is more than child’s play. It could help provide power to those living in developing countries. His company, Stratodynamics Aviation Inc., developed two new inventions that harness National Aeronautics and Space Administration (NASA) technology as part of a global Space Race start-up challenge. The U.S. Center for Advancing Innovation held the contest in partnership with NASA to create space technology spinoffs using SKYFISH IS A NASA patents or inventions. PARAFOIL KITE Pundsack’s team was the only Canadian team among ATTACHED TO the 15 finalists announced last A GENERATOR November. ON THE One of the team’s inventions, GROUND THAT called Skyfish, is a parafoil kite PRODUCES attached to a generator on the ENERGY FOR ground that produces energy for OFF-THE-GRID off-the-grid markets. More than MARKETS one billion people worldwide, mostly in developing countries, live without a regular source of power. “There is a growing market of micro-grid developers who are providing power in places where there is no infrastructure,” says Pundsack, MBA ’12. He also sees potential applications for Skyfish in rural areas. Skyfish produces 2,000 watts of energy — enough to power about 30 homes. The kite automatically flies in a figure-eight pattern in high-wind areas, pulling 28  |  PORTICO  Spring 2017

on two lines that turn the generator as the lines are extended. Once the kite is fully extended, it is navigated to a low-wind area and the lines are reeled in until the cycle can repeat. A NASA-developed control system steers the kite, and a battery bank stores the energy for immediate or future use. Another innovation is an unmanned glider called HiDRON that provides weather-monitoring data. Traditional weather balloons are launched twice a day from 900 sites worldwide. In the U.S. alone, that’s about 75,000 weather balloons launched annually. “Once the balloon bursts, the equipment (called a radiosonde) parachutes back uncontrolled and about 80 per cent of this equipment is lost,” says Pundsack. If no one finds the equipment, it becomes waste. Weighing only 500 grams, HiDRON hitches a ride on a weather balloon and glides back to Earth, carrying the weather monitoring equipment so it can be reused. GPS technology allows the glider to be tracked, and also monitors wind speed and direction. “The glider will be able to fly itself back, but maybe over time stay aloft longer by using natural currents that are available,” says Pundsack. Most weather data such as temperature, barometric pressure and relative humidity is collected by weather balloons with radiosondes as they float up to the stratosphere, as high as 18,000 metres above the Earth. “All of the data collected goes into building our weather forecasts,” he says. “That process hasn’t really changed since the 1930s.” Pundsack says the technology could be used

Bringing space technology down to Earth

The University of Guelph's magazine for alumni and friends. 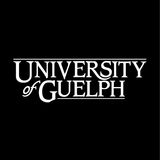 More from University of Guelph