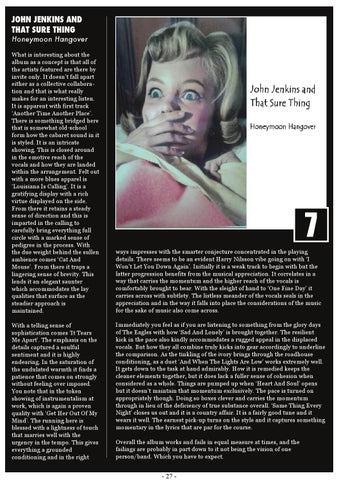 JOHN JENKINS AND THAT SURE THING

Honeymoon Hangover What is interesting about the album as a concept is that all of the artists featured are there by invite only. It doesn’t fall apart either as a collective collaboration and that is what really makes for an interesting listen. It is apparent with first track ‘Another Time Another Place’. There is something bridged here that is somewhat old-school form how the cabaret sound in it is styled. It is an intricate showing. This is closed around in the emotive reach of the vocals and how they are landed within the arrangement. Felt out with a more blues apparel is ‘Louisiana Is Calling’. It is a gratifying display with a rich virtue displayed on the side. From there it retains a steady sense of direction and this is imparted in the calling to carefully bring everything full circle with a marked sense of pedigree in the process. With the due weight behind the sullen ambience comes ‘Cat And Mouse’. From there it traps a lingering sense of brevity. This lends it an elegant saunter which accommodates the lay qualities that surface as the steadier approach is maintained. With a telling sense of sophistication comes ‘It Tears Me Apart’. The emphasis on the details captured a soulful sentiment and it is highly endearing. In the saturation of the undulated warmth it finds a patience that comes on strongly without feeling over imposed. You note that in the token showing of instrumentalism at work, which is again a proven quality with ‘Get Her Out Of My Mind’. The running here is blessed with a lightness of touch that marries well with the urgency in the tempo. This gives everything a grounded conditioning and in the right

7 ways impresses with the smarter conjecture concentrated in the playing details. There seems to be an evident Harry Nilsson vibe going on with ‘I Won’t Let You Down Again’. Initially it is a weak track to begin with but the latter progression benefits from the musical appreciation. It correlates in a way that carries the momentum and the higher reach of the vocals is comfortably brought to bear. With the sleight of hand to ‘One Fine Day’ it carries across with subtlety. The listless meander of the vocals seals in the appreciation and in the way it falls into place the considerations of the music for the sake of music also come across. Immediately you feel as if you are listening to something from the glory days of The Eagles with how ‘Sad And Lonely’ is brought together. The resilient kick in the pace also kindly accommodates a rugged appeal in the displaced vocals. But how they all combine truly kicks into gear accordingly to underline the comparison. As the tinkling of the ivory brings through the roadhouse conditioning, as a duet ‘And When The Lights Are Low’ works extremely well. It gets down to the task at hand admirably. How it is remedied keeps the cleaner elements together, but it does lack a fuller sense of cohesion when considered as a whole. Things are pumped up when ‘Heart And Soul’ opens but it doesn’t maintain that momentum exclusively. The pace is turned on appropriately though. Doing so boxes clever and carries the momentum through in lieu of the deficiency of true substance overall. ‘Same Thing Every Night’ closes us out and it is a country affair. It is a fairly good tune and it wears it well. The earnest pick-up turns on the style and it captures something momentary in the lyrics that are par for the course. Overall the album works and fails in equal measure at times, and the failings are probably in part down to it not being the vision of one person/band. Which you have to expect.

In this month's issue we have interviews with Dublin band Brass Phantoms, Johnny Rayge, exmagician, Super Hyper Giant. While our international music network sees us interview The Slow Readers Club ahead of their debut Irish gig in The Workman's Club on April 23rd. We have also managed to catch up with Corey Valentine, Mano for The Manc Tank as well as She Drew The Gun for The Scouse House. SONAR this month sees us focus on 10 acts recommended via our Washington network. While our editor's choice of four music videos for the March 4x4 is also well worth checking out. All of this in addition to the best in album, EP and single reviews recommended through our international network of 95 co-ops in 49 countries. 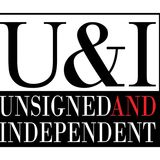