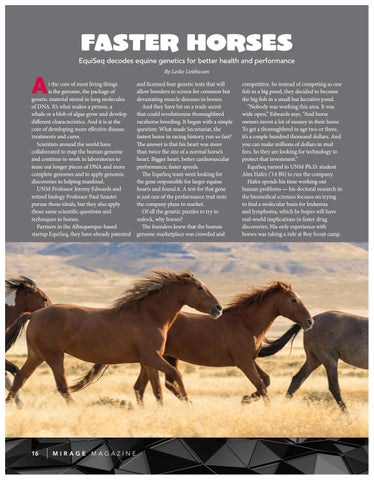 t the core of most living things is the genome, the package of genetic material stored in long molecules of DNA. It’s what makes a person, a whale or a blob of algae grow and develop different characteristics. And it is at the core of developing more effective disease treatments and cures. Scientists around the world have collaborated to map the human genome and continue to work in laboratories to tease out longer pieces of DNA and more complete genomes and to apply genomic discoveries to helping mankind. UNM Professor Jeremy Edwards and retired biology Professor Paul Szauter pursue those ideals, but they also apply those same scientific questions and techniques to horses. Partners in the Albuquerque-based startup EquiSeq, they have already patented

and licensed four genetic tests that will allow breeders to screen for common but devastating muscle diseases in horses. And they have hit on a trade secret that could revolutionize thoroughbred racehorse breeding. It began with a simple question: What made Secretariat, the fastest horse in racing history, run so fast? The answer is that his heart was more than twice the size of a normal horse’s heart. Bigger heart, better cardiovascular performance, faster speeds. The EquiSeq team went looking for the gene responsible for larger equine hearts and found it. A test for that gene is just one of the performance trait tests the company plans to market. Of all the genetic puzzles to try to unlock, why horses? The founders knew that the human genome marketplace was crowded and

competitive. So instead of competing as one fish in a big pond, they decided to become the big fish in a small but lucrative pond. “Nobody was working this area. It was wide open,” Edwards says. “And horse owners invest a lot of money in their horse. To get a thoroughbred to age two or three, it’s a couple hundred thousand dollars. And you can make millions of dollars in stud fees. So they are looking for technology to protect that investment.” EquiSeq turned to UNM Ph.D. student Alex Hafez (’14 BS) to run the company. Hafez spends his time working out human problems — his doctoral research in the biomedical sciences focuses on trying to find a molecular basis for leukemia and lymphoma, which he hopes will have real-world implications in faster drug discoveries. His only experience with horses was taking a ride at Boy Scout camp. 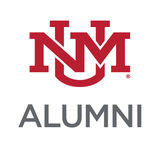