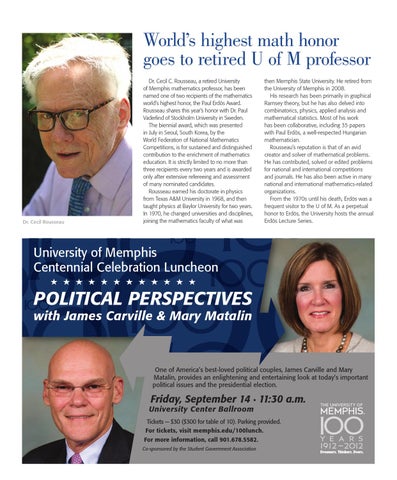 Dr. Cecil C. Rousseau, a retired University of Memphis mathematics professor, has been named one of two recipients of the mathematics world’s highest honor, the Paul Erdös Award. Rousseau shares this year’s honor with Dr. Paul Vaderlind of Stockholm University in Sweden. The biennial award, which was presented in July in Seoul, South Korea, by the World Federation of National Mathematics Competitions, is for sustained and distinguished contribution to the enrichment of mathematics education. It is strictly limited to no more than three recipients every two years and is awarded only after extensive refereeing and assessment of many nominated candidates. Rousseau earned his doctorate in physics from Texas A&amp;M University in 1968, and then taught physics at Baylor University for two years. In 1970, he changed universities and disciplines, 7/27/12 joining2:35 the PM mathematics faculty of what was

then Memphis State University. He retired from the University of Memphis in 2008. His research has been primarily in graphical Ramsey theory, but he has also delved into combinatorics, physics, applied analysis and mathematical statistics. Most of his work has been collaborative, including 35 papers with Paul Erdös, a well-respected Hungarian mathematician. Rousseau’s reputation is that of an avid creator and solver of mathematical problems. He has contributed, solved or edited problems for national and international competitions and journals. He has also been active in many national and international mathematics-related organizations. From the 1970s until his death, Erdös was a frequent visitor to the U of M. As a perpetual honor to Erdös, the University hosts the annual Erdös Lecture Series.

One of America’s best-loved political couples, James Carville and Mary Matalin, provides an enlightening and entertaining look at today’s important political issues and the presidential election. 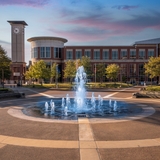