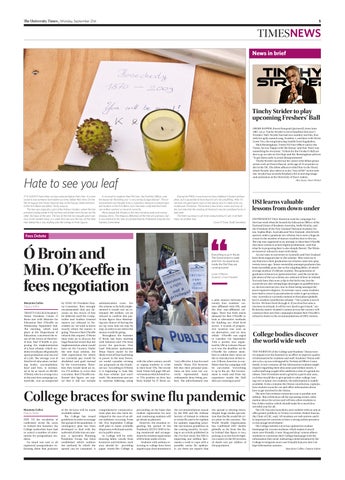 Tinchy Strider to play upcoming Freshers’ Ball GRIME RAPPER, Kwasi Danquah (pictured), born June 1987, a.k.a. Tinchy Stryder is set to headline this year’s Freshers’ Ball. Stryder has had two number one hits, first with his aptly named song, Number 1, and later with Never Leave You, the song featuring Amelle from Sugababes. Mick Birmingham, Trinity SU Ents Officer said to the Times, he was ‘happy with the lineup’ and that ‘there was something for everyone.’ Tickets for the Fresher’s Ball are due to go on sale on 21st Sept and Mr. Birmingham advises ‘To get them early to avoid dissapointment’ Tinchy Stryder started out his career with fellow grime artists such as Dizzee Rascal, at the age of 14 on pirate radio in the UK. His debut album is titled Star in the Hood, which Stryder also refers to as his “way of life” on his website. Stryder has recently finished a BA in moving image and animation at the University of East London. Alex Joyce, News Writer

Hate to see you leaf IT IS ALWAYS hard when we lose someone before their time. It is even worse to lose someone from before our time, before their time. On the 9th of August, the Horse Chestnut tree at the Nassau Street entrance to the Arts Block was felled. Trinity mourns. The tree was originally a part of the Fellows’ Garden, where the tree provided cooling shade in the Summer and shelter from the rain for the other 363 days of the year. The loss of the tree has brought great sadness to the student body, in a week that also saw the loss of that bike that looked like it was melting onto the railings in Front Square.

In an email to students Noel McCann, the Facilities Officer, said the reason for the felling was “a very serious fungal disease”. The announcement was thought to be a cautionary measure to prevent general hysteria in the Arts Block, but it has been confirmed that trees can neither contract or transmit swine flu. Many people left tributes to the tree including cards and various religious items. The religious affiliations of the tree are unknown, but it was planted at the time of a predominantly Protestant Grounds and Gardens Committee.

During the 1960s it was known to have dabbled in Eastern philosophies, but is purported to have found it all a bit unfulfilling. After it’s removal, the great giant was cut into pieces and it is likely to be cremated over Christmas. The funeral is due to be a warm and cosy affair, but note that the roasting of chestnuts may be considered to be in bad taste. The tree’s successor is yet to be announced but it will, in all likelihood, be another tree. Conor O’Toole, Staff Comediest

Ó Broin and Min. O’Keeffe in fees negotiation Marykate Collins Deputy Editor TRINITY COLLEGE Student’s Union President Cónán Ó Broin met with Minister for Education Batt O’Keeffe on Wednesday September 2nd. The meeting, which took place at the Department of Education, concerned the issue of the return of third level fees. Batt O’Keeffe is proposing the implementation of a loan scheme, which students would pay off gradually upon graduation and secural of a job. The average cost of third level education, including books, accomodation, food and fees, is estimated to be as much as 69,500. Ó Broin, who is a strong voice in the anti-fees campaign nationwide, was accompanied

by NUIG SU President Donna Cummins. They strongly recommended that any decision on the return of fees be deferred until the Comptroller and Auditor General reports are released in December as; ‘we want to know exactly where the money is going.’ However Batt O’keeffe refused this request. Ó Broin then went on to discuss the huge financial strain that the implementation alone would have on the Country. Under the new loan scheme, the 1500 registration fee which we currently pay would be abolished and paid instead by the Government. Therefore they would need an extra 173 million to cover that cost alone. Batt O’Keeffe confirmed this figure, yet stated that it did not include

administration costs. For the scheme to be fully implemented it would cost an estimated 300 million, yet he refused to confirm this particular figure thus eliminating any chance of having the set up costs laid out step by step, in order to see where the money would be going. Throughout the Summer Ó Broin has been meeting with Senators and TDs from across the spectrum. Fine Gael Education spokesman Brian Hayes stated ‘in the likely event of Fine Gael being in power in the near future, we would consider revising our proposals on the Graduate tax.’ According to Ó Broin it is beginning to look like the loan scheme ‘just won’t work’. His intentions now are to continue lobbying, along

Everything is up in the air. The Government is weak and from my experience inside the Dail they are running scared Conan O’Braoin Students’ Union President

with the other unions, aswell as urging students to write to their local TDs. The recent Irish Times full page USI advertisement which listed every TDs position on fees, has been hailed by Ó Broin as;

‘very effective; it has focused minds.’ Many TDs however felt that their personal positions on fees were not correctly represented; many vehemently deny being profees. The advertisement was

a joint venture between the twenty four students’ unions affiliated with USI, and the four non-affiliated colleges. There has been much demand for Batt O’Keeffe to look at alternative methods for funding our third level sector. A system of progressive taxation was seen as an alternative, and an area which O’Keeffe was urged to consider. On September 15th a protest was organised by USI at Leinster House as it was the deadline set by O’Keeffe for cabinet members to submit their views on the re-introduction of fees issue. Ó Broin, however, is confident that the campaign will be successful; ‘everything is up in the air. The Government is weak and from my experience inside the Dail they are running scared.’

College braces for swine flu pandemic Marykate Collins Deputy Eidtor DUE TO the escalation of confirmed swine flu cases in Ireland this Summer, the College authorities have had to cancel a number of orientations for postgraduate students. An email was sent to all registered postgraduates informing them that podcasts

of the lectures will be made available online. The College has issued guidelines in order to assuage the spread of the pandemic. A contingency plan has been developed to deal with the outbreak of infection on campus. A specialist Planning Pandemic Group has been established which outlines the methods by which the spread can be contained. A

comprehensive communications plan has also been developed in the case of an allout epidemic occuring. From the 21st September College staff plan to make available dispensers with hand sanitisers in public areas. As College will be withdrawing fabric towels from lavatories and kitchens, each area should be providing paper towels.The College is

proceeding on the basis that student registration for new and continuing students will go ahead as planned. However, the situation regarding the spread of the Pandemic (H1N1) 2009 is being monitored and arrangements for student registration will be kept under review. Students with asthma returning to college have been urged to pay close attention to

the recommendations issued by the HSE and the Asthma Society of Ireland in relation to swine flu and to be vigilant for updates regarding possible vaccination guidelines in the coming months. According to an article published in the Post last week, the HSE is importing one million facemasks a week to cope with a possible swine flu epidemic, yet there are reports that

the spread is slowing down, despite huge media speculation that the flu would hit crisis point in the autumn. The World Health Organisation has confirmed 2837 deaths globally so far from the flu; in Ireland that figure is two, putting us as the fourth highest country in the EU in terms of death rate per million of the population.

USI learns valuable lessons from down-under USI PRESIDENT Peter Mannion took his campaign further last week when he hosted the Education Officer of the National Union of Students Australia, Stefie Hinchy, and the President of the New Zealand National Students Union, Sophia Blair. Australia and New Zealand, which both operate under a graduate tax scheme, have seen a huge decrease in the number of mature students due to this tax. The trip was organised in an attempt to show Batt O’Keeffe that their system is at best highly problematic, and that what he is proposing here is also deeply flawed. The Minister however refused to meet with them. Access rates to university in Australia and New Zealand have been stagnant due to the scheme. They went on to say that since their graduation tax scheme came into play, twenty years ago, home ownership amongst graduates has been incredibly poor, due to the crippling debts, of which average at about 27,000 per student. This generation of graduates is known as ‘generation hex’, and the social implications of the tax scheme are unheard of here in ireland. Not only have they seen a dip in the birth rate, but the countries are also seeing huge shortages in qualified nurses, doctors and lawyers, due to these being amongst the more expensive degrees. In extreme cases, some students have had to resort to prostitution in order to get an education. Australia is currently ranked in third place globally for it’s student contribution scheme. “Our system is not effective. We have lived through it. If you lose free education here in ireland, it will be very hard to get it back,” stefie hinchy stated. Student’s unions across the country will continue their anti-fees campaigns despite Batt O’Keeffe’s refusal to listen to the recommendations of USI’s visitors.

College bodies discover the world wide web THE WEBSITES of the College and Students’ Union were revamped over the Summer in an effort to improve quality of information for students and staff. Students’ Union website tcdsu.org was redesigned by Technical Officer Conor Smith. It now contains all the information students might require regarding their education and welfare needs. A useful and long sought after addition is that of a grinds database. Now if students need a grind in a particular area, or if they would like to give grinds to other college, leaving cert or junior cert students, the information is readily available. It also contains the Union constitution, explains how student councils run and offers information about how to get involved in the Union. The new Ents website trinityents.com is another new edition. This will feature all the upcoming events, information about the artists and will also allow students to buy tickets online, which should make for a much less stressful year for all. The CSC has also launched a new website with an aim to offer greater publicity to Trinity’s societies. Robert Kearns, the Chair of CSC, said, ‘All students are web natives and it is important for societies to have a strong online presence to encourage involvement.’ The College website tcd.ie has updated its student homepage for current students, which makes it much more user-friendly. A new ‘drag and drop’ system allows students to customise their College homepage with the information they need, indicating a determination by the College to integrate more user-friendly features into College information systems . Marykate Collins, Deputy Editor 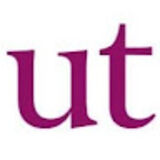