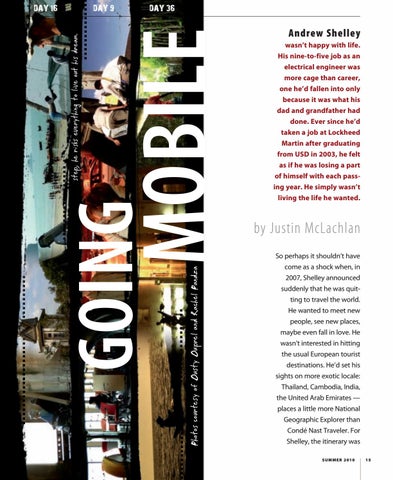 DAY 9 step, he risks everything to live out his dream.

Andrew Shelley wasn’t happy with life. His nine-to-five job as an electrical engineer was more cage than career, one he’d fallen into only because it was what his dad and grandfather had done. Ever since he’d taken a job at Lockheed Martin after graduating from USD in 2003, he felt as if he was losing a part of himself with each passing year. He simply wasn’t living the life he wanted.

by Justin McLachlan So perhaps it shouldn’t have come as a shock when, in 2007, Shelley announced suddenly that he was quitting to travel the world. He wanted to meet new people, see new places, maybe even fall in love. He wasn’t interested in hitting the usual European tourist destinations. He’d set his sights on more exotic locale: Thailand, Cambodia, India, the United Arab Emirates — places a little more National Geographic Explorer than Condé Nast Traveler. For Shelley, the itinerary was SUMMER 2010 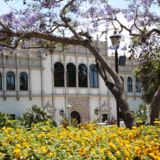 Alumni magazine for the University of San Diego

Alumni magazine for the University of San Diego