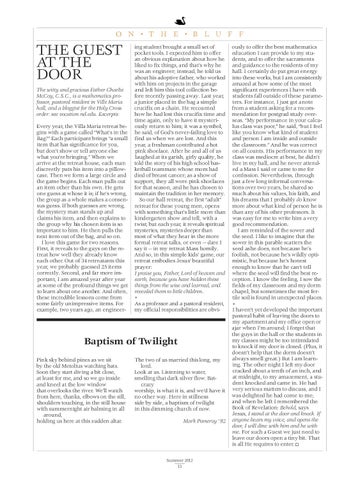 THE GUEST AT THE DOOR The witty and gracious Father Charlie McCoy, C.S.C., is a mathematics professor, pastoral resident in Ville Maria hall, and a bloggist for the Holy Cross order: see vocation.nd.edu. Excerpts: Every year, the Villa Maria retreat begins with a game called “What’s in the Bag?” Each participant brings “a small item that has significance for you, but don’t show or tell anyone else what you’re bringing.” When we arrive at the retreat house, each man discreetly puts his item into a pillowcase. Then we form a large circle and the game begins. Each man pulls out an item other than his own. He gets one guess at whose it is; if he’s wrong, the group as a whole makes a consensus guess. If both guesses are wrong, the mystery man stands up and claims his item, and then explains to the group why his chosen item is so important to him. He then pulls the next item out of the bag, and so on. I love this game for two reasons. First, it reveals to the guys on the retreat how well they already know each other. Out of 34 retreatants this year, we probably guessed 25 items correctly. Second, and far more important, I am amazed year after year at some of the profound things we get to learn about one another. And often, these incredible lessons come from some fairly unimpressive items. For example, two years ago, an engineer-

ing student brought a small set of pocket tools. I expected him to offer an obvious explanation about how he liked to fix things, and that’s why he was an engineer; instead, he told us about his adoptive father, who worked with him on projects in the garage and left him this tool collection before recently passing away. Last year, a junior placed in the bag a simple crucifix on a chain. He recounted how he had lost this crucifix time and time again, only to have it mysteriously return to him; it was a symbol, he said, of God’s never-failing love to find us when we are lost. And this year, a freshman contributed a hot pink shoelace. After he and all of us laughed at its garish, girly quality, he told the story of his high school basketball teammate whose mom had died of breast cancer; as a show of support, they all wore pink shoelaces for that season, and he has chosen to maintain the tradition in her memory. So our hall retreat, the first “adult” retreat for these young men, opens with something that’s little more than kindergarten show and tell, with a twist; but each year, it reveals spiritual mysteries, mysteries deeper than most of what they hear in the more formal retreat talks, or even — dare I say it — in my retreat Mass homily. And so, in this simple kids’ game, our retreat embodies Jesus’ beautiful prayer: I praise you, Father, Lord of heaven and earth, because you have hidden these things from the wise and learned, and revealed them to little children. * As a professor and a pastoral resident, my official responsibilities are obvi-

Baptism of Twilight Pink sky behind pines as we sit by the old Metolius watching bats. Soon they start diving a bit close, at least for me, and so we go inside and kneel at the low window that overlooks the river. We’ll watch from here, thanks, elbows on the sill, shoulders touching, in the still house with summernight air balming in all around, holding us here at this sudden altar.

The two of us married this long, my lord. Look at us. Listening to water, smelling that dark silver flow. Batcrazy worship, is what it is, and we’d have it no other way. Here in stillness side by side, a baptism of twilight in this dimming church of now. Mark Pomeroy ’ 92

ously to offer the best mathematics education I can provide to my students, and to offer the sacraments and guidance to the residents of my hall. I certainly do put great energy into these works, but I am consistently amazed at how some of the most significant experiences I have with students fall outside of these parameters. For instance, I just got a note from a student asking for a recommendation for postgrad study overseas. “My performance in your calculus class was poor,” he said, “but I feel like you know what kind of student and person I am inside and outside the classroom.” And he was correct on all counts. His performance in my class was mediocre at best, he didn’t live in my hall, and he never attended a Mass I said or came to me for confession. Nevertheless, through just a few long informal conversations over two years, he shared so much about his values, his faith, and his dreams that I probably do know more about what kind of person he is than any of his other professors. It was easy for me to write him a very good recommendation. I am reminded of the sower and the seed. I like to imagine that the sower in this parable scatters the seed as he does, not because he’s foolish, not because he’s wildly optimistic, but because he’s honest enough to know that he can’t tell where the seed will find the best reception. I know the feeling. I sow the fields of my classroom and my dorm chapel, but sometimes the most fertile soil is found in unexpected places. * I haven’t yet developed the important pastoral habit of leaving the doors to my apartment and my office open or ajar when I’m around; I forget that the guys in the hall or the students in my classes might be too intimidated to knock if my door is closed. (Plus, it doesn’t help that the dorm doesn’t always smell great.) But I am learning. The other night I left my door cracked about a tenth of an inch, and at midnight, to my amazement, a student knocked and came in. He had very serious matters to discuss, and I was delighted he had come to me; and when he left I remembered the Book of Revelation: Behold, says Jesus, I stand at the door and knock. If anyone hears my voice, and opens the door, I will dine with him and he with me. For such a Guest we just need to leave our doors open a tiny bit. That is all He requires to enter. n

Summer 2012 issue of Portland Magazine featuring "Paper Cranes," by Betsy Johnson-Miller; Jeff Kennel's nursing clinicals photo essay; "To Lead Out," by Fr. Tom Doyle, C.S.C.; notes and photos about the Holy Cross brothers who have served the University of Portland; "Doubts & Wonders," by Thomas Lynch; and "Levitating the Cat," by Laura Oliver. 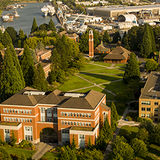