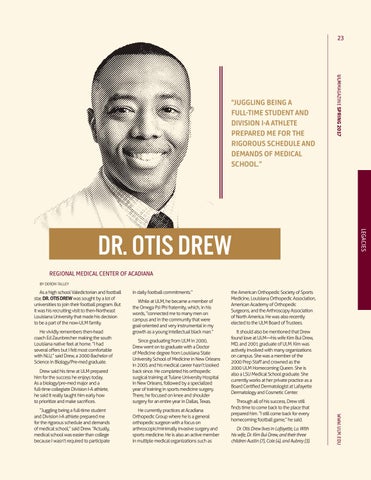 “JUGGLING BEING A FULL-TIME STUDENT AND DIVISION I-A ATHLETE PREPARED ME FOR THE RIGOROUS SCHEDULE AND DEMANDS OF MEDICAL SCHOOL.”

As a high school Valedictorian and football star, DR. OTIS DREW was sought by a lot of universities to join their football program. But it was his recruiting visit to then-Northeast Louisiana University that made his decision to be a part of the now-ULM family. He vividly remembers then-head coach Ed Zaunbrecher making the south Louisiana native feel at home. “I had several offers but I felt most comfortable with NLU,” said Drew, a 2000 Bachelor of Science in Biology/Pre-med graduate.

in daily football commitments.” While at ULM, he became a member of the Omega Psi Phi fraternity, which, in his words, “connected me to many men on campus and in the community that were goal-oriented and very instrumental in my growth as a young intellectual black man.”

“Juggling being a full-time student and Division I-A athlete prepared me for the rigorous schedule and demands of medical school,” said Drew. “Actually, medical school was easier than college because I wasn’t required to participate

He currently practices at Acadiana Orthopedic Group where he is a general orthopedic surgeon with a focus on arthroscopic/minimally invasive surgery and sports medicine. He is also an active member in multiple medical organizations such as

It should also be mentioned that Drew found love at ULM—his wife Kim Bui Drew, MD, and 2001 graduate of ULM. Kim was actively involved with many organizations on campus. She was a member of the 2000 Prep Staff and crowned as the 2000 ULM Homecoming Queen. She is also a LSU Medical School graduate. She currently works at her private practice as a Board Certified Dermatologist at Lafayette Dermatology and Cosmetic Center. Through all of his success, Drew still finds time to come back to the place that prepared him. “I still come back for every homecoming football game,” he said. Dr. Otis Drew lives in Lafayette, La. With his wife, Dr. Kim Bui Drew, and their three children Austin (7), Cole (4), and Aubrey (3).

Drew said his time at ULM prepared him for the success he enjoys today. As a biology/pre-med major and a full-time collegiate Division I-A athlete, he said it really taught him early how to prioritize and make sacrifices.

Since graduating from ULM in 2000, Drew went on to graduate with a Doctor of Medicine degree from Louisiana State University School of Medicine in New Orleans in 2005 and his medical career hasn’t looked back since. He completed his orthopedic surgical training at Tulane University Hospital in New Orleans, followed by a specialized year of training in sports medicine surgery. There, he focused on knee and shoulder surgery for an entire year in Dallas, Texas.

the American Orthopedic Society of Sports Medicine, Louisiana Orthopedic Association, American Academy of Orthopedic Surgeons, and the Arthroscopy Association of North America. He was also recently elected to the ULM Board of Trustees. 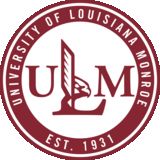