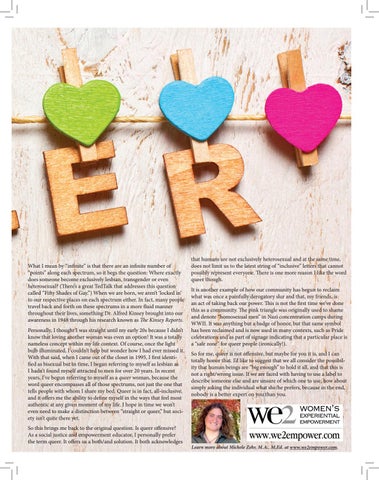 What I mean by “infinite” is that there are an infinite number of “points” along each spectrum, so it begs the question: Where exactly does someone become exclusively lesbian, transgender or even heterosexual? (There’s a great TedTalk that addresses this question called “Fifty Shades of Gay.”) When we are born, we aren’t ‘locked in’ to our respective places on each spectrum either. In fact, many people travel back and forth on these spectrums in a more fluid manner throughout their lives, something Dr. Alfred Kinsey brought into our awareness in 1948 through his research known as The Kinsey Reports. Personally, I thought I was straight until my early 20s because I didn’t know that loving another woman was even an option! It was a totally nameless concept within my life context. Of course, once the light bulb illuminated, I couldn’t help but wonder how I had ever missed it. With that said, when I came out of the closet in 1995, I first identified as bisexual but in time, I began referring to myself as lesbian as I hadn’t found myself attracted to men for over 20 years. In recent years, I’ve begun referring to myself as a queer woman, because the word queer encompasses all of those spectrums, not just the one that tells people with whom I share my bed. Queer is in fact, all-inclusive, and it offers me the ability to define myself in the ways that feel most authentic at any given moment of my life. I hope in time we won’t even need to make a distinction between “straight or queer,” but society isn’t quite there yet. So this brings me back to the original question. Is queer offensive? As a social justice and empowerment educator, I personally prefer the term queer. It offers us a both/and solution. It both acknowledges

that humans are not exclusively heterosexual and at the same time, does not limit us to the latest string of “inclusive” letters that cannot possibly represent everyone. There is one more reason I like the word queer though. It is another example of how our community has begun to reclaim what was once a painfully derogatory slur and that, my friends, is an act of taking back our power. This is not the first time we’ve done this as a community. The pink triangle was originally used to shame and denote “homosexual men” in Nazi concentration camps during WWII. It was anything but a badge of honor, but that same symbol has been reclaimed and is now used in many contexts, such as Pride celebrations and as part of signage indicating that a particular place is a “safe zone” for queer people (ironically!). So for me, queer is not offensive, but maybe for you it is, and I can totally honor that. I’d like to suggest that we all consider the possibility that human beings are “big enough” to hold it all, and that this is not a right/wrong issue. If we are faced with having to use a label to describe someone else and are unsure of which one to use, how about simply asking the individual what she/he prefers, because in the end, nobody is a better expert on you than you. 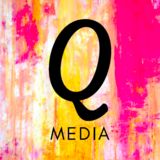