Keeping our promise to children 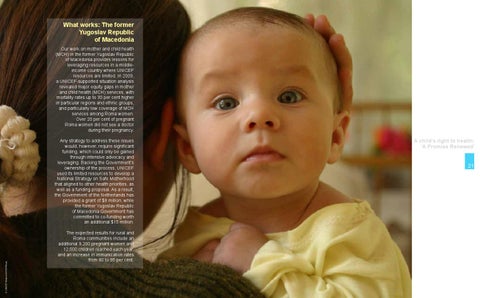 What works: The former Yugoslav Republic of Macedonia Our work on mother and child health (MCH) in the former Yugoslav Republic of Macedonia provides lessons for leveraging resources in a middleincome country where UNICEF resources are limited. In 2009, a UNICEF-supported situation analysis revealed major equity gaps in mother and child health (MCH) services, with mortality rates up to 30 per cent higher in particular regions and ethnic groups, and particularly low coverage of MCH services among Roma women. Over 20 per cent of pregnant Roma women did not see a doctor during their pregnancy.

Any strategy to address these issues would, however, require significant funding, which could only be gained through intensive advocacy and leveraging. Backing the Government’s ownership of the process, UNICEF used its limited resources to develop a National Strategy on Safe Motherhood that aligned to other health priorities, as well as a funding proposal. As a result, the Government of the Netherlands has provided a grant of $8 million, while the former Yugoslav Republic of Macedonia Government has committed to co-funding worth an additional $15 million. The expected results for rural and Roma communities include an additional 9,200 pregnant women and 12,500 children reached each year, and an increase in immunization rates from 80 to 95 per cent.

A child’s right to health: ‘A Promise Renewed’

Keeping our promise to children

Keeping our promise to children: an agenda for action UNICEF in Central and Eastern Europe and the Commonwealth of Independent States - 2013 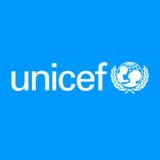