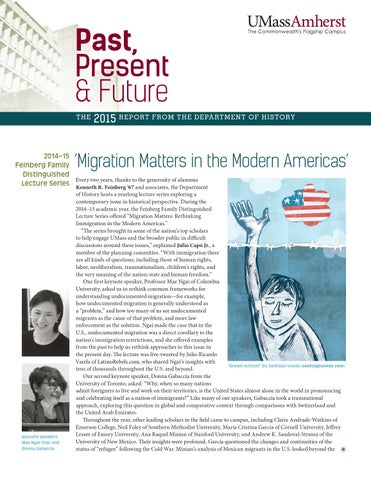 Past, Present & Future THE

‘Migration Matters in the Modern Americas’

2014–15 Feinberg Family Distinguished Every two years, thanks to the generosity of alumnus Lecture Series Kenneth R. Feinberg ’67 and associates, the Department

of History hosts a yearlong lecture series exploring a contemporary issue in historical perspective. During the 2014–15 academic year, the Feinberg Family Distinguished Lecture Series offered “Migration Matters: Rethinking Immigration in the Modern Americas.” “The series brought in some of the nation’s top scholars to help engage UMass and the broader public in difficult discussions around these issues,” explained Julio Capó Jr., a member of the planning committee. “With immigration there are all kinds of questions, including those of human rights, labor, neoliberalism, transnationalism, children’s rights, and the very meaning of the nation-state and human freedom.” Our first keynote speaker, Professor Mae Ngai of Columbia University, asked us to rethink common frameworks for understanding undocumented migration—for example, how undocumented migration is generally understood as a “problem,” and how too many of us see undocumented migrants as the cause of that problem, and more law enforcement as the solution. Ngai made the case that in the U.S., undocumented migration was a direct corollary to the nation’s immigration restrictions, and she offered examples from the past to help us rethink approaches to this issue in the present day. The lecture was live-tweeted by Julio Ricardo Varela of LatinoRebels.com, who shared Ngai’s insights with “Dream Activist” by Santiago Uceda (santiagouceda.com). tens of thousands throughout the U.S. and beyond. Our second keynote speaker, Donna Gabaccia from the University of Toronto, asked: “Why, when so many nations admit foreigners to live and work on their territories, is the United States almost alone in the world in pronouncing and celebrating itself as a nation of immigrants?” Like many of our speakers, Gabaccia took a transnational approach, exploring this question in global and comparative context through comparisons with Switzerland and the United Arab Emirates. Throughout the year, other leading scholars in the field came to campus, including Claire Andrade-Watkins of Emerson College, Neil Foley of Southern Methodist University, María Cristina García of Cornell University, Jeffrey Lesser of Emory University, Ana Raquel Minian of Stanford University, and Andrew K. Sandoval-Strausz of the University of New Mexico. Their insights were profound. García questioned the changes and continuities of the status of “refugee” following the Cold War. Minian’s analysis of Mexican migrants in the U.S. looked beyond the → 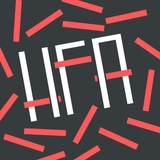 Past, Present, Future: the 2015 Report from the UMass Amherst History Department

Past, Present, Future: the 2015 Report from the UMass Amherst History Department