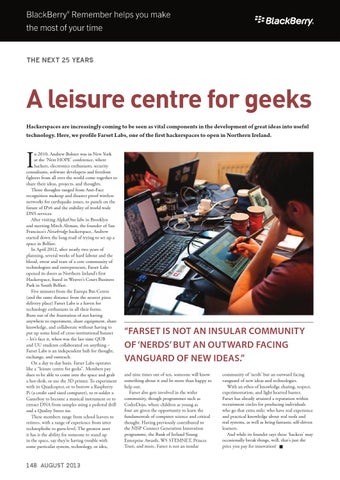 A leisure centre for geeks Hackerspaces are increasingly coming to be seen as vital components in the development of great ideas into useful technology. Here, we profile Farset Labs, one of the first hackerspaces to open in Northern Ireland.

n 2010, Andrew Bolster was in New York at the ‘Next HOPE’ conference, where hackers, electronics enthusiasts, security consultants, software developers and freedom fighters from all over the world come together to share their ideas, projects, and thoughts. Those thoughts ranged from Anti-Face recognition makeup and disaster proof wireless networks for earthquake zones, to panels on the future of IPv6 and the stability of world wide DNS services. After visiting AlphaOne labs in Brooklyn and meeting Mitch Altman, the founder of San Francisco’s Noisebridge hackerspace, Andrew started down the long road of trying to set up a space in Belfast. In April 2012, after nearly two years of planning, several weeks of hard labour and the blood, sweat and tears of a core community of technologists and entrepreneurs, Farset Labs opened its doors as Northern Ireland’s first Hackerspace, based in Weaver’s Court Business Park in South Belfast. Five minutes from the Europa Bus Centre (and the same distance from the nearest pizza delivery place) Farset Labs is a haven for technology enthusiasts in all their forms. Born out of the frustration of not having anywhere to experiment, share equipment, share knowledge, and collaborate without having to put up some kind of cross-institutional banner – let’s face it, when was the last time QUB and UU students collaborated on anything – Farset Labs is an independent hub for thought, exchange, and outreach. On a day to day basis, Farset Labs operates like a “leisure centre for geeks”. Members pay dues to be able to come into the space and grab a hot-desk, or use the 3D printer. To experiment with its Quadcopter, or to borrow a Raspberry Pi (a credit card sized computer), to re-solder a Gameboy to become a musical instrument or to extract DNA from samples using a pedestal drill and a Quality Street tin. These members range from school leavers to retirees, with a range of experience from utter technophobe to guru-level. The greatest asset it has is the ability for someone to stand up in the space, say they’re having trouble with some particular system, technology, or idea,

“FARSET IS NOT AN INSULAR COMMUNITY OF ‘NERDS’ BUT AN OUTWARD FACING VANGUARD OF NEW IDEAS.” and nine times out of ten, someone will know something about it and be more than happy to help out. Farset also gets involved in the wider community, though programmes such as CoderDojo, where children as young as four are given the opportunity to learn the fundamentals of computer science and critical thought. Having previously contributed to the NISP Connect Generation Innovation programme, the Bank of Ireland Young Enterprise Awards, W5 STEMNET, Princes Trust, and more, Farset is not an insular

community of ‘nerds’ but an outward facing vanguard of new ideas and technologies. With an ethos of knowledge sharing, respect, experimentation, and light hearted banter, Farset has already attained a reputation within recruitment circles for producing individuals who go that extra mile; who have real experience and practical knowledge about real tools and real systems, as well as being fantastic self-driven learners. And while its founder says these ‘hackers’ may occasionally break things, well, that’s just the price you pay for innovation! 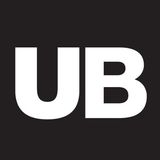