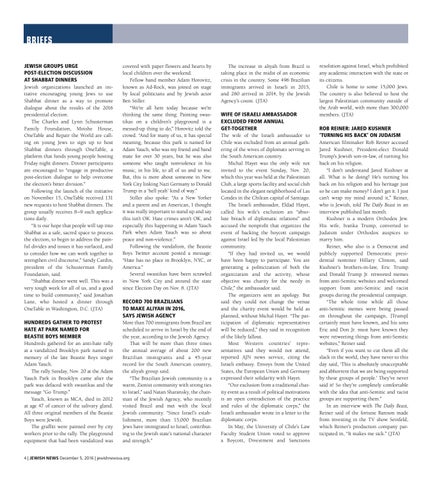 Briefs Jewish groups urge post-election discussion at Shabbat dinners Jewish organizations launched an initiative encouraging young Jews to use Shabbat dinner as a way to promote dialogue about the results of the 2016 presidential election. The Charles and Lynn Schusterman Family Foundation, Moishe House, OneTable and Repair the World are calling on young Jews to sign up to host Shabbat dinners through OneTable, a platform that funds young people hosting Friday night dinners. Dinner participants are encouraged to “engage in productive post-election dialogue to help overcome the election’s bitter division.” Following the launch of the initiative on November 15, OneTable received 131 new requests to host Shabbat dinners. The group usually receives 8–9 such applications daily. “It is our hope that people will tap into Shabbat as a safe, sacred space to process the election, to begin to address the painful divides and issues it has surfaced, and to consider how we can work together to strengthen civil discourse,” Sandy Cardin, president of the Schusterman Family Foundation, said. “Shabbat dinner went well. This was a very tough week for all of us, and a good time to build community,” said Jonathan Lane, who hosted a dinner through OneTable in Washington, D.C. (JTA) Hundreds gather to protest hate at park named for Beastie Boys member Hundreds gathered for an anti-hate rally at a vandalized Brooklyn park named in memory of the late Beastie Boys singer Adam Yauch. The rally Sunday, Nov. 20 at the Adam Yauch Park in Brooklyn came after the park was defaced with swastikas and the message “Go Trump.” Yauch, known as MCA, died in 2012 at age 47 of cancer of the salivary gland. All three original members of the Beastie Boys were Jewish. The graffiti were painted over by city workers prior to the rally. The playground equipment that had been vandalized was

covered with paper flowers and hearts by local children over the weekend. Fellow band member Adam Horovitz, known as Ad-Rock, was joined on stage by local politicians and by Jewish actor Ben Stiller. “We’re all here today because we’re thinking the same thing: Painting swastikas on a children’s playground is a messed-up thing to do,” Horovitz told the crowd. “And for many of us, it has special meaning, because this park is named for Adam Yauch, who was my friend and band mate for over 30 years, but he was also someone who taught nonviolence in his music, in his life, to all of us and to me. But, this is more about someone in New York City linking Nazi Germany to Donald Trump in a ‘hell yeah’ kind of way.” Stiller also spoke: “As a New Yorker and a parent and an American, I thought it was really important to stand up and say this isn’t OK. Hate crimes aren’t OK, and especially this happening in Adam Yauch Park when Adam Yauch was so about peace and non-violence.” Following the vandalism, the Beastie Boys Twitter account posted a message: “Hate has no place in Brooklyn, NYC, or America.” Several swastikas have been scrawled in New York City and around the state since Election Day on Nov. 8. (JTA)

Record 700 Brazilians to make aliyah in 2016, says Jewish Agency More than 700 immigrants from Brazil are scheduled to arrive in Israel by the end of the year, according to the Jewish Agency. That will be more than three times the annual average of about 200 new Brazilian immigrants and a 45-year record for the South American country, the aliyah group said. “The Brazilian Jewish community is a warm, Zionist community with strong ties to Israel,” said Natan Sharansky, the chairman of the Jewish Agency, who recently visited Brazil and met with the local Jewish community. “Since Israel’s establishment, more than 15,000 Brazilian Jews have immigrated to Israel, contributing to the Jewish state’s national character and strength.”

The increase in aliyah from Brazil is taking place in the midst of an economic crisis in the country. Some 496 Brazilian immigrants arrived in Israeli in 2015, and 280 arrived in 2014, by the Jewish Agency’s count. (JTA)

Wife of Israeli ambassador excluded from annual get-together The wife of the Israeli ambassador to Chile was excluded from an annual gathering of the wives of diplomats serving in the South American country. Michal Hayet was the only wife not invited to the event Sunday, Nov. 20, which this year was held at the Palestinian Club, a large sports facility and social club located in the elegant neighborhood of Las Condes in the Chilean capital of Santiago. The Israeli ambassador, Eldad Hayet, called his wife’s exclusion an “absolute breach of diplomatic relations” and accused the nonprofit that organizes the event of backing the boycott campaign against Israel led by the local Palestinian community. “If they had invited us, we would have been happy to participate. You are generating a politicization of both the organization and the activity, whose objective was charity for the needy in Chile,” the ambassador said. The organizers sent an apology. But said they could not change the venue and the charity event would be held as planned, without Michal Hayet. “The participation of diplomatic representatives will be reduced,” they said in recognition of the likely fallout. Most Western countries’ representatives said they would not attend, reported AJN news service, citing the Israeli embassy. Envoys from the United States, the European Union and Germany expressed their solidarity with Hayet. “Our exclusion from a traditional charity event as a result of political motivations is an open contradiction of the practice and rules of the diplomatic corps,” the Israeli ambassador wrote in a letter to the diplomatic corps. In May, the University of Chile’s Law Faculty Student Union voted to approve a Boycott, Divestment and Sanctions

resolution against Israel, which prohibited any academic interaction with the state or its citizens. Chile is home to some 15,000 Jews. The country is also believed to host the largest Palestinian community outside of the Arab world, with more than 300,000 members. (JTA)

Rob Reiner: Jared Kushner ‘turning his back’ on Judaism American filmmaker Rob Reiner accused Jared Kushner, President-elect Donald Trump’s Jewish son-in-law, of turning his back on his religion. “I don’t understand Jared Kushner at all. What is he doing? He’s turning his back on his religion and his heritage just so he can make money? I don’t get it. I just can’t wrap my mind around it,” Reiner, who is Jewish, told The Daily Beast in an interview published last month. Kushner is a modern Orthodox Jew. His wife, Ivanka Trump, converted to Judaism under Orthodox auspices to marry him. Reiner, who also is a Democrat and publicly supported Democratic presidential nominee Hillary Clinton, said Kushner’s brothers-in-law, Eric Trump and Donald Trump Jr. retweeted memes from anti-Semitic websites and welcomed support from anti-Semitic and racist groups during the presidential campaign. “The whole time while all those anti-Semitic memes were being passed on throughout the campaign, [Trump] certainly must have known, and his sons Eric and Don Jr. must have known they were retweeting things from anti-Semitic websites,” Reiner said. “Even if you want to cut them all the slack in the world, they have never to this day said, ‘This is absolutely unacceptable and abhorrent that we are being supported by these groups of people.’ They’ve never said it! So they’re completely comfortable with the idea that anti-Semitic and racist groups are supporting them.” In an interview with The Daily Beast, Reiner said of the fortune Bannon made from investing in the TV show Seinfeld, which Reiner’s production company participated in, “It makes me sick.” (JTA)