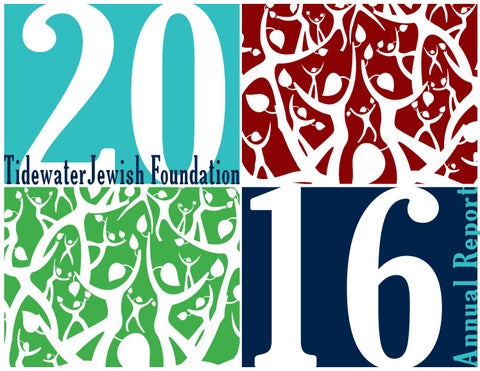 Because of you, in 2016 the Tidewater Jewish Foundation was able to grant over $165,000 to support 18 programs in our Jewish community from its unrestricted â&#x20AC;&#x153;community impactâ&#x20AC;? grants pool. Below are just a few examples of the programs made possible by the legacy you created. You can view a complete list of grant recipients at www.JewishVa.org/tjf-grants

Accomodating students who are sensory seeking and need movement while learning.

An evening to commemorate and honor the victims and survivors of the Holocaust.

Expressions of the Holocaust

Providing seniors with a basic understanding of how to use a computer and explore the Internet.

FROM THE PRESIDENT & CEO: As Jerry and I reflect upon our past year and look ahead optimistically into our future, we are grateful to our loyal donors and community members who have made our Tidewater Jewish Community so strong and vibrant. We are grateful to have formed a strong working relationship together and with our donors, affiliates and agencies. We look forward to a smooth transition of leadership with Alvin Wall as our next Chair for Fiscal Years 2017-2018. We are excited to build upon our strengths, reach out to more people to engage and create an even stronger Foundation and future Jewish community for all.

The Simon Family Legacy Society honors those who have committed themselves to the future of our Jewish community. The Society encompasses all donors who have either pledged to leave a gift or already maintain an endowed gift at the Tidewater Jewish Foundation.

* These condensed financial summaries of the ending balances and the activities for the fiscal year ending June 30, 2016 do not include all disclosures or the presentation format required by generally accepted accounting principals (GAAP). Complete audited financial statements combining the ending balances and activities of Tidewater Jewish Foundation and its Supporting Foundations for this period, which are prepared and presented in accordance with GAAP, including all required disclosures, will be made available upon request and posted to JewishVA.org/tjf-financials by December 31, 2016.

nvestment Review – Concerns about global growth and the timing of future additional rate increases by the Federal Reserve led to modest returns in large cap domestic stocks and negative returns in all other equity sectors. The hardest hit sector was emerging market equities with capital flight in the first six months of the fiscal year despite some recovery in the second half. Concerns about Chinese growth and the perilous state of the Brazilian economy compounded worries. Both Japan and Europe engaged in further monetary stimulus with little effect. The surprising vote of the United Kingdom to leave the European Union adds uncertainty for Europe that will have impact on trade and currencies and increases volatility in global equity markets.

benefits from its partnership in the Jewish Community Endowment Pool, LLP (JCEP), managed by the Combined Jewish Philanthropies of Greater Boston. JCEP strives for stability over long-term horizons and structures its portfolio with a focus on capital preservation, minimizing declines during weak equity markets while capturing a significant percentage of the positive returns during strong equity markets. This was clear over the last five years where JCEP captured over 101% of returns relative to its index target when its index target was positive, but only captured 75% when the index target declined. During the financial crisis of 2008-09, JCEP outperformed 91% of the 264 foundations and endowments tracked by InvestorForce* during the worst period of the crash.

Relatively, stability and modest growth in the United States looks firmly entrenched. Unemployment has reached levels close to what is considered full employment and we seem to be on the cusp of wage gains. However, productivity gains in the US have been declining for a number of years. That combined with a lower birth rate in the US could lead to a permanent, lower level of growth.

Developed markets worldwide kept downward pressure on US rates during the year. The yield of the benchmark ten year treasury declined approximately 0.90% for the year.

The Tidewater Jewish Foundation’s (TJF) diversified main investment pool declined 1.3% for the fiscal year, leading its index target of -2.4% and outperforming 58% of the 782 endowments and foundations tracked by InvestorForce*. TJF

TJF has been awarded a certificate of conformance to the Best Practices under the Global Fiduciary Standard of Excellence as assessed by The Colony Group. The Advisory Process is modeled after the Fiduciary Quality Management System, as established by the Center for Fiduciary Excellence, to facilitate ongoing conformity with the Standard. In the execution of The Colony Group’s four-step Process, TJF documents and recordings were reviewed, including: Investment Policy Statements and Asset Allocation Analyses, Investment Committee Meeting minutes, bylaws, as well as other investment governance records maintained by TJF.

onoring the values of tzedakah and tikkun olam, the tidewater jewish foundation is dedicated to creating permanent resources to meet the challenges and needs of the jewish community. the foundation educates individuals, families and its affiliates on the rewards of philanthropy and facilitates the philanthropic process through planned giving and endowments. foundation grants and distributions serve the needs of hampton roads, the united states, israel and nations worldwide. donors partnering with tjf and its federations and other affiliates can achieve their philanthropic goals and create their legacy for future generations.

We extend our gratitude to our sponsor, The Colony Group, LLC, for their generous support of this Report.