The University of Georgia Magazine June 2010 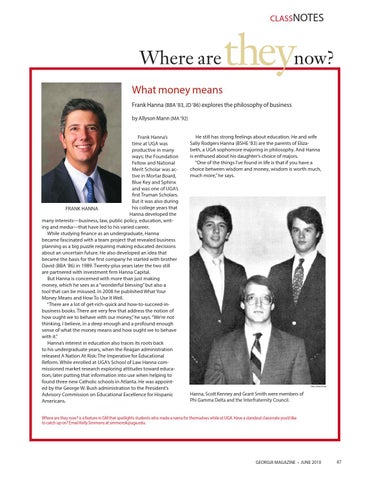 What money means Frank Hanna (BBA ’83, JD ’86) explores the philosophy of business by Allyson Mann (MA ’92) Frank Hanna’s time at UGA was productive in many ways; the Foundation Fellow and National Merit Scholar was active in Mortar Board, Blue Key and Sphinx and was one of UGA’s first Truman Scholars. But it was also during his college years that FRANK HANNA Hanna developed the many interests—business, law, public policy, education, writing and media—that have led to his varied career. While studying finance as an undergraduate, Hanna became fascinated with a team project that revealed business planning as a big puzzle requiring making educated decisions about an uncertain future. He also developed an idea that became the basis for the first company he started with brother David (BBA ’86) in 1989. Twenty-plus years later the two still are partnered with investment firm Hanna Capital. But Hanna is concerned with more than just making money, which he sees as a “wonderful blessing” but also a tool that can be misused. In 2008 he published What Your Money Means and How To Use It Well. “There are a lot of get-rich-quick and how-to-succeed-inbusiness books. There are very few that address the notion of how ought we to behave with our money,” he says. “We’re not thinking, I believe, in a deep enough and a profound enough sense of what the money means and how ought we to behave with it.” Hanna’s interest in education also traces its roots back to his undergraduate years, when the Reagan administration released A Nation At Risk: The Imperative for Educational Reform. While enrolled at UGA’s School of Law Hanna commissioned market research exploring attitudes toward education, later putting that information into use when helping to found three new Catholic schools in Atlanta. He was appointed by the George W. Bush administration to the President’s Advisory Commission on Educational Excellence for Hispanic Americans.

He still has strong feelings about education. He and wife Sally Rodgers Hanna (BSHE ’83) are the parents of Elizabeth, a UGA sophomore majoring in philosophy. And Hanna is enthused about his daughter’s choice of majors. “One of the things I’ve found in life is that if you have a choice between wisdom and money, wisdom is worth much, much more,” he says.

Hanna, Scott Kenney and Grant Smith were members of Phi Gamma Delta and the Interfraternity Council.

Where are they now? is a feature in GM that spotlights students who made a name for themselves while at UGA. Have a standout classmate you’d like to catch up on? Email Kelly Simmons at simmonsk@uga.edu.

The University of Georgia Magazine June 2010 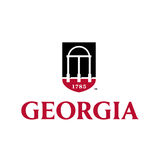