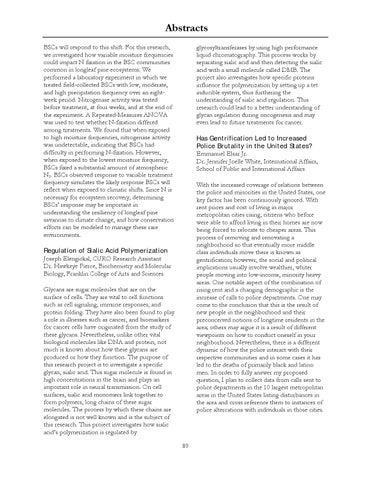 Abstracts BSCs will respond to this shift. For this research, we investigated how variable moisture frequencies could impact N fixation in the BSC communities common in longleaf pine ecosystems. We performed a laboratory experiment in which we treated field-collected BSCs with low, moderate, and high precipitation frequency over an eightweek period. Nitrogenase activity was tested before treatment, at four weeks, and at the end of the experiment. A Repeated-Measures ANOVA was used to test whether N-fixation differed among treatments. We found that when exposed to high moisture frequencies, nitrogenase activity was undetectable, indicating that BSCs had difficulty in performing N-fixation. However, when exposed to the lowest moisture frequency, BSCs fixed a substantial amount of atmospheric N2. BSCs observed response to variable treatment frequency simulates the likely response BSCs will reflect when exposed to climatic shifts. Since N is necessary for ecosystem recovery, determining BSCsâ&amp;#x20AC;&amp;#x2122; response may be important in understanding the resiliency of longleaf pine savannas to climate change, and how conservation efforts can be modeled to manage these rare environments.

glycosyltransferases by using high performance liquid chromatography. This process works by separating sialic acid and then detecting the sialic acid with a small molecule called DMB. The project also investigates how specific proteins influence the polymerization by setting up a tet inducible system, thus furthering the understanding of sialic acid regulation. This research could lead to a better understanding of glycan regulation during oncogenesis and may even lead to future treatments for cancer. Has Gentrification Led to Increased Police Brutality in the United States? Emmanuel Elsar Jr. Dr. Jennifer Joelle White, International Affairs, School of Public and International Affairs With the increased coverage of relations between the police and minorities in the United States, one key factor has been continuously ignored. With rent prices and cost of living in major metropolitan cities rising, citizens who before were able to afford living in their homes are now being forced to relocate to cheaper areas. This process of removing and renovating a neighborhood so that eventually more middle class individuals move there is known as gentrification; however, the social and political implications usually involve wealthier, whiter people moving into low-income, minority heavy areas. One notable aspect of the combination of rising rent and a changing demographic is the increase of calls to police departments. One may come to the conclusion that this is the result of new people in the neighborhood and their preconceived notions of longtime residents in the area; others may argue it is a result of different viewpoints on how to conduct oneself in your neighborhood. Nevertheless, there is a different dynamic of how the police interact with their respective communities and in some cases it has led to the deaths of primarily black and latino men. In order to fully answer my proposed question, I plan to collect data from calls sent to police departments in the 10 largest metropolitan areas in the United States listing disturbances in the area and cross reference them to instances of police altercations with individuals in those cities.

Regulation of Sialic Acid Polymerization Joseph Elengickal, CURO Research Assistant Dr. Hawkeye Pierce, Biochemistry and Molecular Biology, Franklin College of Arts and Sciences Glycans are sugar molecules that are on the surface of cells. They are vital to cell functions such as cell signaling, immune responses, and protein folding. They have also been found to play a role in illnesses such as cancer, and biomarkers for cancer cells have originated from the study of these glycans. Nevertheless, unlike other vital biological molecules like DNA and protein, not much is known about how these glycans are produced or how they function. The purpose of this research project is to investigate a specific glycan, sialic acid. This sugar molecule is found in high concentrations in the brain and plays an important role in neural transmission. On cell surfaces, sialic acid monomers link together to form polymers, long chains of these sugar molecules. The process by which these chains are elongated is not well known and is the subject of this research. This project investigates how sialic acidâ&amp;#x20AC;&amp;#x2122;s polymerization is regulated by 89