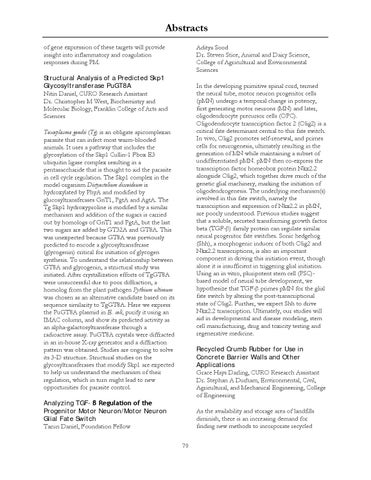 Abstracts of gene expression of these targets will provide insight into inflammatory and coagulation responses during PM.

In the developing primitive spinal cord, termed the neural tube, motor neuron progenitor cells (pMN) undergo a temporal change in potency, first generating motor neurons (MN) and later, oligodendrocyte precursor cells (OPC). Oligodendrocyte transcription factor 2 (Olig2) is a critical fate determinant central to this fate switch. In vivo, Olig2 promotes self-renewal, and primes cells for neurogenesis, ultimately resulting in the generation of MN while maintaining a subset of undifferentiated pMN. pMN then co-express the transcription factor homeobox protein Nkx2.2 alongside Olig2, which together drive much of the genetic glial machinery, marking the initiation of oligodendrogenesis. The underlying mechanism(s) involved in this fate switch, namely the transcription and expression of Nkx2.2 in pMN, are poorly understood. Previous studies suggest that a soluble, secreted transforming growth factor beta (TGF-β) family protein can regulate similar neural progenitor fate switches. Sonic hedgehog (Shh), a morphogenic inducer of both Olig2 and Nkx2.2 transcriptions, is also an important component in driving this initiation event, though alone it is insufficient in triggering glial initiation. Using an in vitro, pluripotent stem cell (PSC)based model of neural tube development, we hypothesize that TGF-β primes pMN for the glial fate switch by altering the post-transcriptional state of Olig2. Further, we expect Shh to drive Nkx2.2 transcription. Ultimately, our studies will aid in developmental and disease modeling, stem cell manufacturing, drug and toxicity testing and regenerative medicine.

Toxoplasma gondii (Tg) is an obligate apicomplexan parasite that can infect most warm-blooded animals. It uses a pathway that includes the glycosylation of the Skp1 Cullin-1 Fbox E3 ubiquitin ligase complex resulting in a pentasaccharide that is thought to aid the parasite in cell cycle regulation. The Skp1 complex in the model organism Dictyostelium discoideum is hydroxylated by PhyA and modified by glucosyltransferases GnT1, PgtA and AgtA. The Tg Skp1 hydroxyproline is modified by a similar mechanism and addition of the sugars is carried out by homologs of GnT1 and PgtA, but the last two sugars are added by GT32A and GT8A. This was unexpected because GT8A was previously predicted to encode a glycosyltransferase (glycogenin) critical for initiation of glycogen synthesis. To understand the relationship between GT8A and glycogenin, a structural study was initiated. After crystallization efforts of TgGT8A were unsuccessful due to poor diffraction, a homolog from the plant pathogen Pythium ultimum was chosen as an alternative candidate based on its sequence similarity to TgGT8A. Here we express the PuGT8A plasmid in E. coli, purify it using an IMAC column, and show its predicted activity as an alpha-galactosyltransferase through a radioactive assay. PuGT8A crystals were diffracted in an in-house X-ray generator and a diffraction pattern was obtained. Studies are ongoing to solve its 3-D structure. Structural studies on the glycosyltransferases that modify Skp1 are expected to help us understand the mechanism of their regulation, which in turn might lead to new opportunities for parasite control.

As the availability and storage area of landfills diminish, there is an increasing demand for finding new methods to incorporate recycled 79