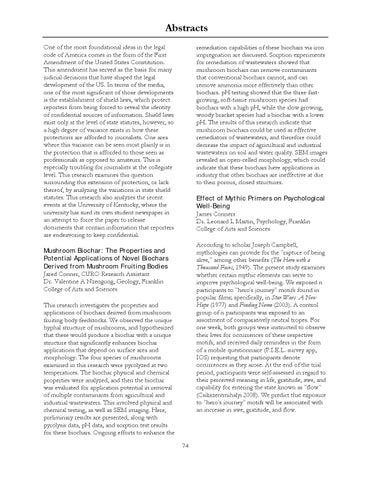 Abstracts One of the most foundational ideas in the legal code of America comes in the form of the First Amendment of the United States Constitution. This amendment has served as the basis for many judicial decisions that have shaped the legal development of the US. In terms of the media, one of the most significant of those developments is the establishment of shield laws, which protect reporters from being forced to reveal the identity of confidential sources of information. Shield laws exist only at the level of state statutes, however, so a high degree of variance exists in how these protections are afforded to journalists. One area where this variance can be seen most plainly is in the protection that is afforded to those seen as professionals as opposed to amateurs. This is especially troubling for journalists at the collegiate level. This research examines this question surrounding this extension of protection, or lack thereof, by analyzing the variations in state shield statutes. This research also analyzes the recent events at the University of Kentucky, where the university has sued its own student newspaper in an attempt to force the paper to release documents that contain information that reporters are endeavoring to keep confidential.

remediation capabilities of these biochars via iron impregnation are discussed. Sorption experiments for remediation of wastewaters showed that mushroom biochars can remove contaminants that conventional biochars cannot, and can remove ammonia more effectively than other biochars. pH testing showed that the three fastgrowing, soft-tissue mushroom species had biochars with a high pH, while the slow growing, woody bracket species had a biochar with a lower pH. The results of this research indicate that mushroom biochars could be used as effective remediators of wastewaters, and therefore could decrease the impact of agricultural and industrial wastewaters on soil and water quality. SEM images revealed an open-celled morphology, which could indicate that these biochars have applications in industry that other biochars are ineffective at due to their porous, closed structures. Effect of Mythic Primers on Psychological Well-Being James Conners Dr. Leonard L Martin, Psychology, Franklin College of Arts and Sciences According to scholar Joseph Campbell, mythologies can provide for the &quot;rapture of being alive,&quot; among other benefits (The Hero with a Thousand Faces, 1949). The present study examines whether certain mythic elements can serve to improve psychological well-being. We exposed n participants to &quot;hero&#39;s journey&quot; motifs found in popular films; specifically, in Star Wars: A New Hope (1977) and Finding Nemo (2003). A control group of n participants was exposed to an assortment of comparatively neutral tropes. For one week, both groups were instructed to observe their lives for occurrences of these respective motifs, and received daily reminders in the form of a mobile questionnaire (P.I.E.L. survey app, IOS) requesting that participants denote occurrences as they arose. At the end of the trial period, participants were self-assessed in regard to their perceived meaning in life, gratitude, awe, and capability for entering the state known as &quot;flow&quot; (Csikszentmihalyi 2008). We predict that exposure to &quot;hero&#39;s journey&quot; motifs will be associated with an increase in awe, gratitude, and flow.

Mushroom Biochar: The Properties and Potential Applications of Novel Biochars Derived from Mushroom Fruiting Bodies Jared Conner, CURO Research Assistant Dr. Valentine A Nzengung, Geology, Franklin College of Arts and Sciences This research investigates the properties and applications of biochars derived from mushroom fruiting body feedstocks. We observed the unique hyphal structure of mushrooms, and hypothesized that these would produce a biochar with a unique structure that significantly enhances biochar applications that depend on surface area and morphology. The four species of mushrooms examined in this research were pyrolyzed at two temperatures. The biochar physical and chemical properties were analyzed, and then the biochar was evaluated for application potential in removal of multiple contaminants from agricultural and industrial wastewaters. This involved physical and chemical testing, as well as SEM imaging. Here, preliminary results are presented, along with pyrolysis data, pH data, and sorption test results for these biochars. Ongoing efforts to enhance the 74